A person is better than their descent.
~old Irish law

Happy Birthday Nate! Today is the birthday of our son Nathan Shepard of Alameda, California. Nathan works for Wells Fargo Bank in San Francisco. He and wife Chenda are the proud parents of three little ones, Preslea, Logan, and William Shepard, who -- have I told you this before? -- are the most beautiful grand kids in the world. They are among the participants in the following magical photo presentation that celebrates Nathan's birthday.

Happy Birthday Ciara! Tomorrow is the birthday of Ciara Ortiz, one of the GGgrandchildren of Will and Bura Shepard and the granddaughter of Kim Boyd Clark. Ciara lives with her family, including mom and dad Desiree and Jeremy Ortiz, in Blue Springs, Missouri. Thanks to Desiree for this picture that shows birthday girl Ciara. 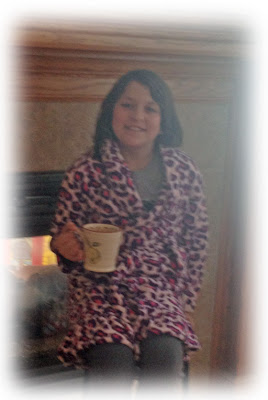 Desiree: Thursday Ciara will be 11. I just can't believe how much she has grown up. Next year she will start middle school and has been selected to be in honors math. She is very excited. Jeremy and I are very proud she is such a smart girl:) We will be traveling to Tucson on Ciara's birthday so we celebrated early with the family by enjoying dinner at Samari Chef a Japanese steak house where they cook your meal in front of you. We had a great time!

Happy Birthday Jim! Tomorrow is also the birthday of my cousin Jimmie Gower, the second son of the late Starlene and Hank Gower. Jim and his wife Cheryl live in Ft. Mohave, Arizona. He is the second grandchild of Leroy and Nola Shannon Gower.

More Irish Blood. Speaking of Nola Shannon Gower, I want to mention a few more of our Irish ancestors -- these are named Pickens -- from whom we are descended through her.

My grandma Gower's father was Samuel Pickens Shannon. His middle name came from his grandmother Anna Pickens. She was the GG grandchild of William Henry Pickens and his wife Margaret Pike, who came over from Ireland in the early 1700s, during a time of massive Irish immigration.

In Dexal Shannon's family history book that I mentioned in my last post, it is stated that Irish immigration was such that by 1749 a fourth of the entire population of Pennsylvania was Scotch Irish. (And you think we've got an immigration problem today!?) Our family history witnesses to that statistic, with numerous Irish immigrants settling in that state, among them William and Margaret Pickens. They are also examples of how Irish immigrants often remained in family clusters for generations, and sometimes intermarried. Two of William and Margaret's grandchildren, Anna Pickens and Matthew Gillespie (first cousins) married each other, an anomaly which (thankfully!) I have not discovered elsewhere among our ancestors. Not yet, anyway.

Margaret Pike Pickens was from the town of Limerick, in the south of Ireland, while her husband William Henry Pickens was originally from La Rochelle, France. He immigrated first to Ireland before he and Margaret came across the Atlantic to the new world and settled north of Philadelphia in the Neshaminy Creek area.

William and Margaret came to America in the first decade of the 1700's, with their 6 children. In the book Scotch Irish Pioneers by Charles Bolton -- you can read it online here -- William and Margaret are listed in the records of a Presbyterian Church at Neshaminy Creek, Pennsylvania, as having been welcomed into the congregation in 1722 as "persons from Eerlant (Ireland)". Also listed as having been welcomed "by certificate" are their son Israel Sidney Pickens, their son-in-law Matthew Gillespie, and Israel's in-laws, George and Lydia Davis, all of whom are found in our family tree, and are people from whom we are directly descended.

I have more to say about these Pickens ancestors, but I will save that for my next post. For now we can add to our growing list of Irish immigrants, William and Margaret and 6 of their children: Israel, Margaret, Robert, Andrew and twins Lucy and Anne, all of whom came over from Ireland. Not long ago I numbered our Irish immigrant ancestors at 11, but that number has now grown to 18.
- - -
Steve Shepard
Posted by Steve Shepard at 9:31 AM

Steve Finnell said...
This comment has been removed by a blog administrator.
12:34 PM

Anonymous said...
This comment has been removed by a blog administrator.
8:34 PM