Another world is not only possible,
she is on her way.
On a quiet day
I can hear her breathing.
~Arundhati Roy

Greetings to all of you once again from the Carnival Ship Legend as we continue our way across the Atlantic. We lumbered out of Florida on this monstrosity a week ago and now she is on her way to Spain where, in another week, our cruise will conclude. 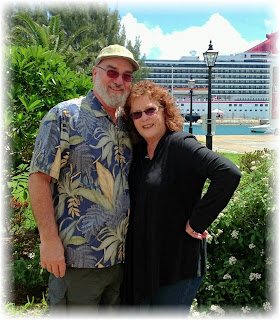 This past Friday we stopped for a day at the Islands of Bermuda where Papa George was kind enough to take this picture of Cindy and me, which shows our ship in the background.

Happy Birthday Rachel! Today is the birthday of Rachel Jane Shepard, the daughter of my brother Darrell and his wife Mary. She is on her way to becoming 26. Rachel lives in Kirkland, Washington and is the Director of the Business Office at a Senior Living facility in the Seattle area.

The second picture, taken last fall, shows Rachel in the middle with Jessica Bell on the left and Nicole Haw Shepard on the right. 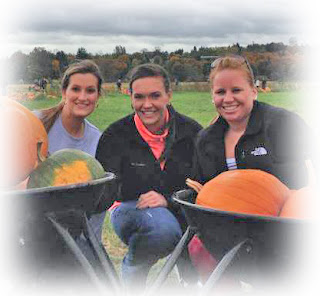 The Irish Count Grows. I keep finding Irish immigrants among our ancestors. In this post I will mention several more, including Eleanor Baskin and John Pickens. They are among the same cluster of immigrants I mentioned in my last couple of posts, all of whom are ancestors of my grandmother Nola Shannon Gower.

John Pickens (1710-1771) was one of the children of Willie and Marge Pickens, the couple I previewed recently. After settling in the area north of Philadelphia in the early 18th century, son John met and then married a young woman named Eleanor Baskin. She had come from Ireland with her own family in the early 1700s and may not have even known John Pickens or his family until they met in America. Three of John's brothers had married girls from the George Davis family, at least partly because they were all part of the same Church north of Philadelphia. John Pickens, however, chose a different family -- the Baskins -- from which to find his life partner.

Eleanor Baskin (1716-1781) came across the Atlantic with her parents William and Mary Baskin. They had come from Donegal, in the north of Ireland, a county from which several of our Irish ancestors originated. So Eleanor and her parents William and Mary are 3 more Irish folks in our family tree who placed their hopes in the promise of the new world and ventured across the Atlantic. Their spirit -- and the spirit of so many Irish immigrants to America -- was the same one felt by the contemporary writer Arundhati Roy in the quote at the top of this post. They were all people who knew that another world was not only possible, she is on her way.