I sustain myself with the love of family.
~Maya Angelou
Greetings to all of you from Orlando, Florida where Cindy and I are attending the General Assembly of the Christian Church (Disciples of Christ) with several thousand other Disciples from around the country. It is a biennial event we enjoy traveling to for the inspiration and fellowship.

In my last post I shared some information and pictures about our family and their cars from the 1920s and 30s. I am continuing that theme in this post and will share a few more pictures of family members with their autos, these from the 1940s and 50s. 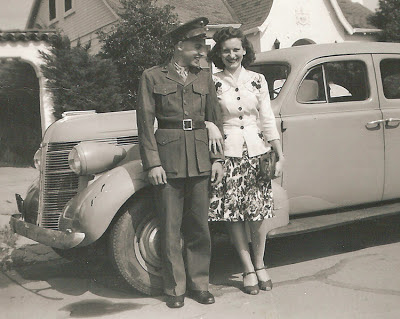 The Way We Were. The first picture shows some young folks enjoying themselves, but this time it is my mom Maida Gower with a boyfriend named Rudy, whom she knew before she met the man she would marry. Mom tells me that this picture was taken in San Diego in 1943 or 44 in front of the Gower home on Arizona Street. Actually the Gower home -- their first in San Diego -- was a small house behind the home that is seen here.

This happy twosome is pictured in front of a beautiful old automobile, which provides a strong, substantial backdrop to the two of them. My mom tells me that the car may have belonged to the owners of the house behind them. If it was Rudy's car it would, of course, have made him especially attractive. It is war time in the military city of San Diego, but you would never know it from the peaceful smiles and warmth of this moment captured in time.

He is in military uniform and she is attired impressively for an Oklahoma farm girl. Only a year or so removed from the small town of Okemah, this lovely, available, Southern Baptist teenage girl now finds herself in the big city of San Diego and is dressed accordingly. She is obviously pleased to be in the company of this marine. Within a year of this picture being taken, it would be another soldier, navy man Eugene Shepard, who would steal Maida's heart as they began a romance that would last almost 60 years, until 2003, when dad died. 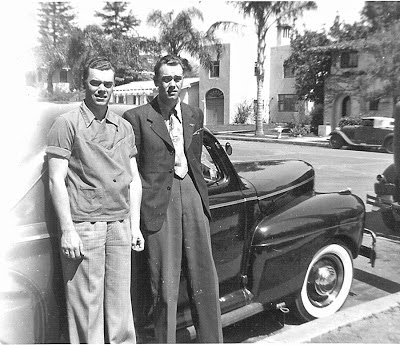 A Hot Ford From the 40s. The second photo, also taken in the early 1940s, shows my dad Eugene (on the right) with his older brother Elmer Shepard, in front of the Shepard rooming house on Albatross St. in the Hillcrest section of San Diego. These are serious fellows, in "civvies", posing with what was soldier Eugene's pride and joy, a shiny new 1941 Ford. He used this vehicle to commute the 100 miles between San Diego and Los Alamitos, California where he was stationed at the Los Alamitos Naval Air Station during WWII. This was probably the vehicle he used to date Maida when they began courting in 1944. 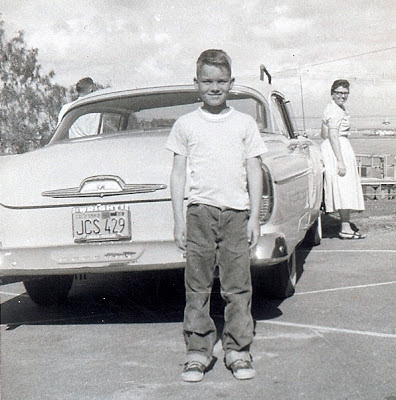 Grandad's Stylish Merc. The third picture takes us into the 1950s. It was taken in August of 1957 in Point Loma in front of our home on Rosecrans Street where Eugene and Maida and their first 4 children lived. We lived in military housing (even though dad was a vet in Civil Service) and had a beautiful view of downtown San Diego, North Island and San Diego bay, some of which you can see in the distance.

Our home on Rosecrans Street, from 1955 to 1959, was actually on military property, which included a fuel supply depot as well as a marine barracks. Even so, our home there was easily accessible (this was obviously many years prior to 9-11) and was a common gathering place for our Shepard and Gower families. Nearly all the members of both families lived in San Diego and were fond of getting together. This picture was taken at one such family gathering.

It shows me as a scruffy 8 year old in wrinkled blue jeans, a t-shirt and tennis shoes. I am standing in front of granddad's stylish Mercury, which was just a few years old at the time. Also in this picture are granddad William Shepard, partially visible on the left, and his daughter, my aunt Pauline Shepard Russell on the right.

It was probably my mom (often the photographer in our family) or perhaps my uncle Bill Russell who took this picture. Whoever it was, they considered it appropriate to include granddad's Mercury in the background, a vehicle I remember riding in a number of times. It was usually driven by granddad, but occasionally by grandmother Bura. Even today, I can remember as an 8 year old boy being impressed that my grandmother would drive the car. My other grandmother, Nola Gower, never learned to drive, which may have been part of the reason I admired my grandmother Shepard when she did.

These are just a few of the dozens of old family pictures that show our kinfolk along side their vehicles. Each one tells a number of stories, unfortunately many of them lost to history after all these years. If you are interested in previous blog posts where I have included old pictures of family members with their cars, check out links here and here, here and here and especially here where you can see the very oldest picture I have of some family members with their car.

As I mentioned in my last post, if you have other old pictures of family members with their cars, pass them on to me with a little something of the stories contained therein. I'd be glad to share them here for all to read.
- - -
Steve Shepard

Posted by Steve Shepard at 5:29 AM