The farther back you can look,
the farther forward you are likely to see.
~Winston Churchill

Greetings to all of you from sunny San Diego!

I am sharing three old pictures today that were all taken in the 1920s and 1930s, when my parents were young. These pictures tell of the important place that automobiles had in our family's lives in the early 20th century. It is somewhat surprising how often pictures in that day were taken of family members alongside their automobiles. We do that occasionally today, of course, but it seems to have been even more natural for this phenomenon to have occurred in a time when cars carried greater significance than they do today.

Even though automobiles made their appearance around the turn of the century, in the 1920s and 30s they were just becoming the norm for the average American. Automobiles in that time were somewhat comparable to personal computers for us today. It was a new technology that had only been around a few decades and was drastically changing the very fabric of American society and family life. 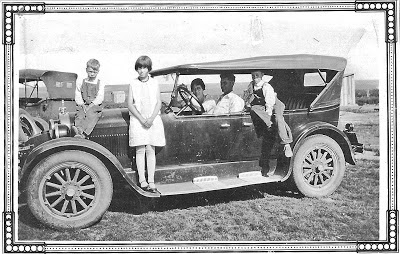 Pride Of Ownership. The first picture is one of the oldest I have of our family with an automobile. It shows my grandparents William and Bura Davis Shepard with their first three children. Judging from the age of the children (and the fact that their 4th child Thelma, born 1936, is not in the picture), my guess is that this picture was taken about 1928.

1928 was the year the Shepards moved from Beaver County, Oklahoma to Two Buttes in Southeast Colorado. Perhaps this car was purchased for the purpose of making that move. It shows granddad William sitting in the driver's seat with the pride of ownership written all over his face. Next to him is his young, 30 something wife Bura, looking to be pleased and proud of this "modern" family portrait.

Positioned at various locations on the vehicle are their children, like fruit on a tree. On the hood, obedient and well behaved, is young Eugene. On the running board is Pauline, standing confidently in a prominent position, befitting her stature as the first born. And sitting behind his dad, in a place of safety and closeness to his parents, is middle child Elmer, his face in the shade.

The overall impression I get here is of a family that is pleased to claim ownership of this fine traveling machine. They seem to be more than just a little taken with this auto and the place it now has in their family life. They do not look as if they just came in the from working in the fields, like some old family photos. Instead they appear to be clean and fresh and ready to go somewhere, indeed anywhere this wonderful, modern vehicle of transportation will take them. 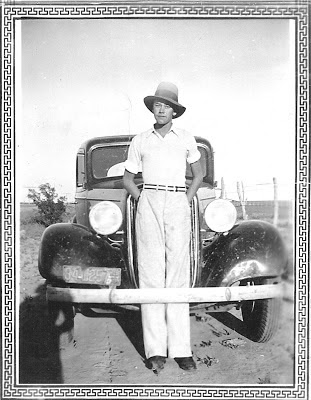 Say Hello To My Lit'l Friend. The second picture, taken about 1935, when the Shepard family lived in Two Buttes, Colorado, shows my father Eugene Shepard by himself, standing in front of what may have been the family's automobile. He's a skinny young school kid (he graduated 1939), and may may have been 14 or 15, at the age when he was just learning how to drive -- a serious right of passage as important for teenagers in the 1930s as it is today.

His posture and his facial expression tell us that he is clearly attached to this vehicle -- almost literally! He stands easily between the front bumper and the radiator, appearing to be comforted by the warmth of this machine. It is as if he is standing alongside a good friend, as if part of his self image -- even at this age -- is wrapped up in his relationship with this four wheeled companion. 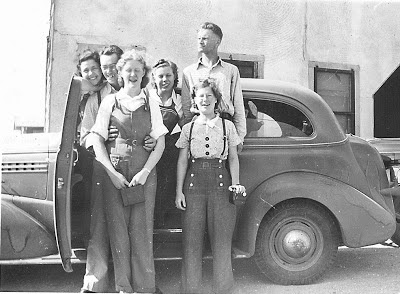 Joy Riding With Friends. The third picture was taken a few years later -- perhaps 1939 or 1940, and indicates a growing maturity of relationship between family and auto, evidenced by the obvious lightheartedness of this particular moment. This picture also appears to have been taken when the Shepards lived in Colorado, before they moved to San Diego in September, 1940.

Dad and some friends (none of whom I can identify) are enjoying a fun time beside a car that has probably taken them on a short road trip. My dad is the one on the left with a tooth missing, cozying up to an unknown girl in front, and one behind, all of them mugging it up for the camera. What are the girls in front holding? Rustic little purses? Brownie cameras? Joy riding with friends in a fancy car like this would definitely have called for photo remembrances.

The unknown fellow standing on the running board is uneasy, looking off into the distance. At what? The open road? An approaching police officer? Gawking spectators? He does not seem to have gotten the joke the others are laughing at. Perhaps he did not find it funny. Was the joke on him? Did it have something to do with the unseen, camera-shy girl in the car who is sticking her high heel shoe up and out the window. What's that all about? One can only imagine.

Our family and their cars: the stories they tell are countless. These are just a few. In my next post I will continue this theme of family members and their cars by looking at a few pictures from the 1940s and 50s.

Do you have other old pictures of family members with their cars? Pass them on to me with a little something of the stories contained therein. I'd be glad to share them for all to read.