Family is like branches on a tree.
We all grow in different directions
yet our roots remain as one.
~Unknown

Happy Birthday, Paula. Happy Birthday today to my cousin Paula Harrell Tuzzolino. With her husband Frank, Paula splits her time between their home in Oak Harbor, Washington, and their home in Sun Lakes, Arizona, near Phoenix. Paula's major concern for the last few months has been for her mother Vicki Gower Johnston who has been in poor health. Paula is one of Vicki's 4 children and one of the 12 grandchildren of Leroy and Nola Shannon Gower. 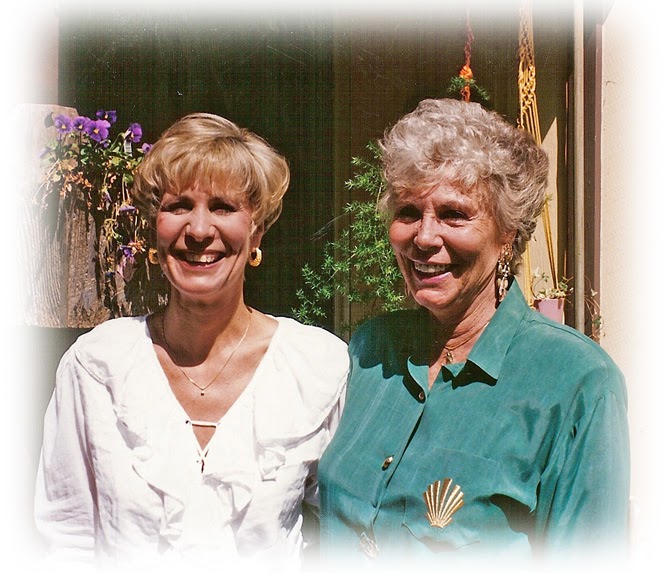 The first picture shows Paula and her mother Vicki in a picture that was taken in 1994 at a family reunion in Anacortes, Washington.

100 Years Ago... It is an interesting and insightful endeavor to look back 100 years in our family. 1914 was a significant time in the life of our ancestors. My Gower grandparents -- Nola Shannon Gower and Leroy Gower -- were young folks living just outside Mountain View, Arkansas. Grandma Nola Shannon Gower was just a 10 year old girl, living in the country home of her family, being the youngest of 9 children.

Grandpa Leroy Gower lived nearby and was child #2 of 7 in his family. 100 years ago he was a young teen just 14 years old. They both lived in the small farming community of Sylamore, Arkansas and undoubtedly knew each other, both being a part of the Baptist Church nearby. 7 years later they would marry and begin an life adventure that would take them to Oklahoma and eventually San Diego, California. 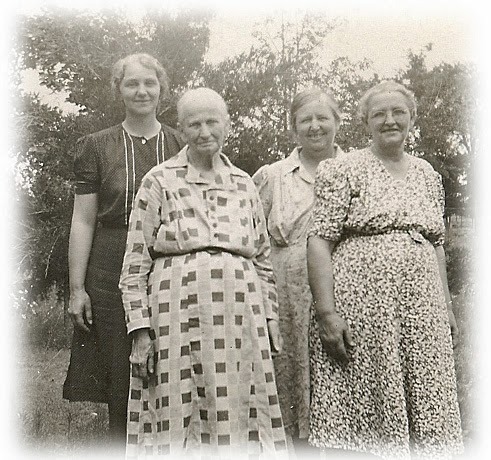 The second picture was taken in the 1920s, probably near Mountain View, Arkansas. On the far left is a young Nola Shannon (Paula's grandmother and Vicki's mother). Also with Nola is her mother Finetta Dearien Shannon and two of Nola's sisters.

In 1914 my other grandparents William Shepard and Bura Davis were also just getting to know each other. They had met just the year before when Bura's family migrated from Indiana to Beaver County, Oklahoma where William's family had already been living for 8 years. 1914 was surely the year that 17 year old Bura and 25 year old William got to know each other well, and was probably the year they fell in love. They married in June of the following year and the adventure of their life together began that would eventually take them to San Diego as well.

1914 was also the year that my grandfather William Shepard, and his father William Elmer Shepard (1862-1915), both became members of the South Flat Church of Christ in Beaver County, Oklahoma, a congregation that, to my knowledge, still exists today. It was the first time that any of our ancestors with the last name Shepard became part of the Stone-Campbell movement (also known as the Restoration Movement), the religious group to which many of the readers of this blog still belong. The family of my grandmother Bura Davis Shepard has been a part of that religious movement since at least the 1850s, originally in Indiana.

Furthermore it was late in 1914 that my Ggrandfather William Elmer Shepard became gravely ill, leading not only to his decision to join the church, but also leading to his death just a few months later in February, 1915. Much of this story I have on an audio recording made by my grandfather William Shepard in 1975. In it he tells of how the South Flat Church folks carefully carried William Elmer to a water filled horse trough for immersion by baptism. That December event (these were hearty folks!) completed his "obedience to the gospel" and his entry into the church.

1914 was a significant year for our ancestors. As we continue through 2014, there will be opportunities to notice other important milestones that the view from a century later will bring.
- - -
Steve Shepard
Posted by Steve Shepard at 8:32 AM