Merry Milestones. Happy Birthday today to my brother Russ Shepard and his son Steven Paul Shepard. Steven has lived his whole life in Anacortes, Washington, while Russ has lived there for 37 years now, ever since the Shepards moved to Washington in 1978. Even though it is Friday the 13th, best wishes to both of them as together they celebrate their birthdays, very possibly at Grammie Maida Shepard's home in Anacortes! 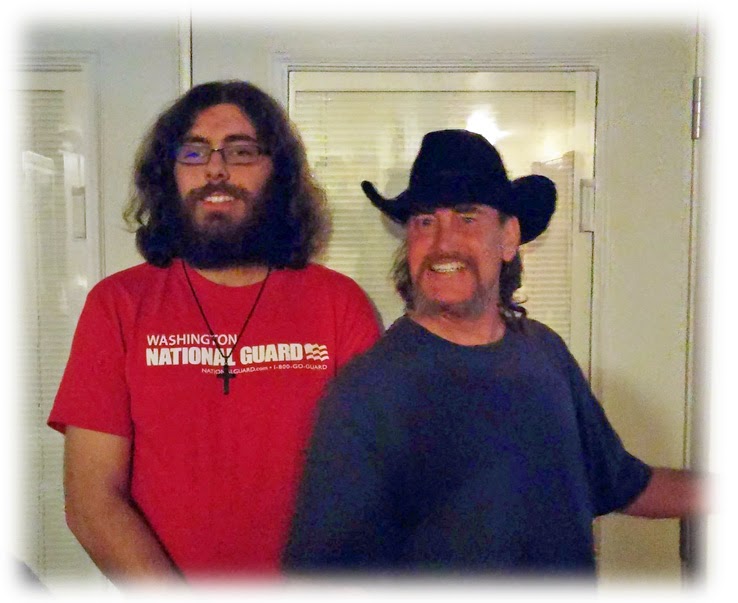 The first picture, taken just yesterday, shows father Russ on the right and son Steven on the left. Thanks to sister Linda Shepard for taking the picture.

Happy Birthday tomorrow, March 14, to my brother-by-another-mother Jerry Clark. Jerry lives today with his wife Cathrina Helms Clark in Lubbock, Texas where he has worked for Taylor Publishing Company for many years. Originally from Albuquerque, New Mexico Jerry attended Lubbock Christian University in the late 1960s, which is when he met and married my sister Linda Shepard (1950-1971) also a student at LCU. 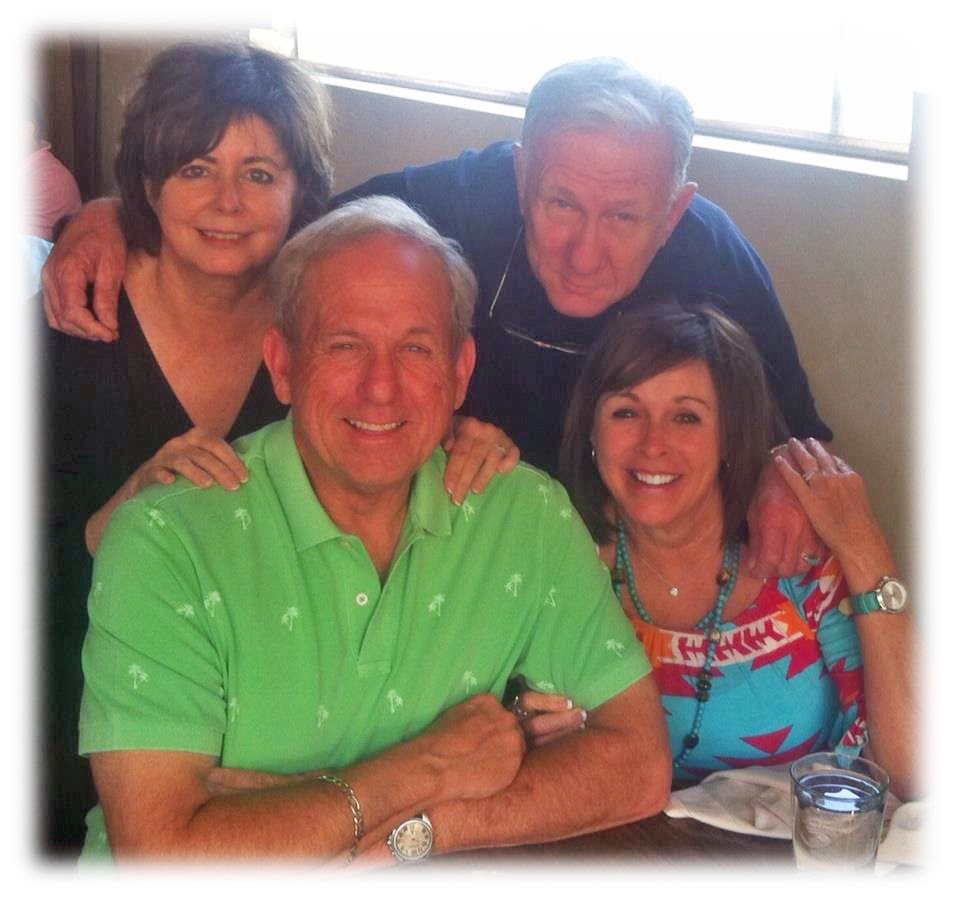 That's when Jerry became a member of our family, and has remained a part of us ever since. The second picture shows Jerry and Cathrina Clark with Jerry's brother Terry Clark and his wife Susan.

A 100th Wedding Anniversary. Later this spring, in early June, we will have opportunity to remember the 100th wedding anniversary of my grandparents William and Bura Davis Shepard. It will be a very special occasion marking a significant milestone in our history.

A 155th Wedding Anniversary. Wednesday of this week marked the 155th anniversary of the wedding of Granddad Shepard's grandparents, William Shepard and Mary Sprague. The story of my Shepard Great Great Grandparents is as heartbreaking as it is important in our family history. Here is a lineage from our Civil War soldier-ancestor William Shepard to his namesake, my grandson William Shepard. 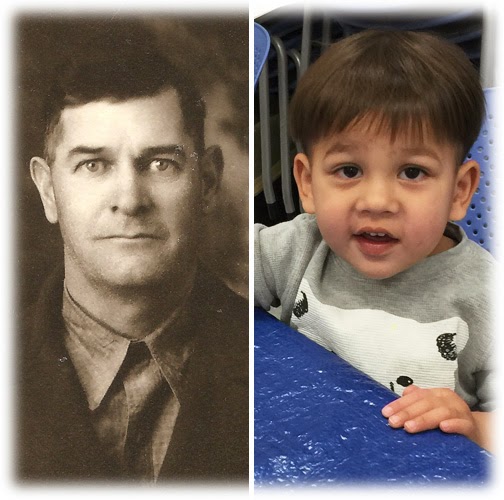 The third picture shows two of the William Shepards listed above, the one on the left my grandfather William Shepard (1888-1976) and on the right my grandson William Quincy Shepard (b. 2012).

Here is a timeline of the important events of the early 1860s, when William and Mary Shepard were married:
William and Mary had what turned out to be a war time romance, with all the drama and tragedy that often attends young people married in war time. Married as the Civil War was ramping up, they had their first child within a year. Another one was on the way when William was drafted into military duty in September, 1861. He died in the summer of 1862, leaving his wife Mary with two young boys, Frank (18 months old) and William Elmer (5 months old). William and Mary were only married 18 months when he left for the war, never to return. What we know about his stint in the military is a story unto itself and you can read about it here.

New Information About Our Shepard Ancestors. For several years I thought that William and Mary's son (Great Grandfather William Elmer Shepard, 1862-1915) was an only child, but I uncovered new information in recent weeks showing that there was another son, Frank J. Shepherd, born to them in late 1860 or early 1861.

Here's how I found out about the TWO sons of William and Mary Sprague Shepard: After Great Great Grandfather William Shepard died in the Civil War, Great Great Grandmother Mary E. Sprague Shepard went back home to Montgomery County, Indiana. 3 years later she married an older widower named William Ragsdale, who had several children already. Together they had several more children and went on to create a blended family. As a result, 19 year old Mary Sprague, who became Mary Shepard for 5 years, became Mary Ragsdale for the last 54 years of her life. Over time, her short but exciting war time marriage to the ill fated soldier William Shepard faded into the background. 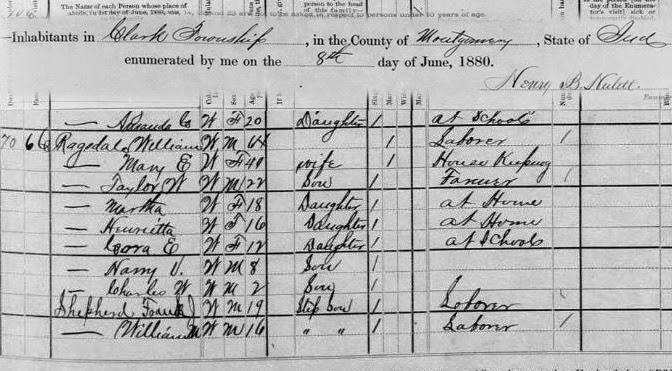 An 1880 U.S. Census record, pictured above, lists the family of William and Mary Ragsdale with the 8 children in their household. The two oldest of those 8 children are listed as "step-sons", and are the children of Mary Shepard Ragsdale and her first husband William Shepard. The older child is Frank J. Shepherd, born in 1860 or 1861, and the younger one is William Shepherd, born in 1862. (You may have to click on the picture to see the document better, although at 135 years old it is understandably hard to read!)

I recently uncovered a record in the "U.S. Civil War and Later Wars Index to Remarried Widow Pensions Applications 1860-1934." It shows that "Mary E. Ragsdale", the remarried widow of Civil War soldier "William C. Sheppard" of the Indiana Cavalry, filed for a pension on June 10, 1901. By that time the soldier William had been dead nearly 40 years, and her second husband William Ragsdale had been dead 14 years. Mary was 61 years old and would live another 18 years. 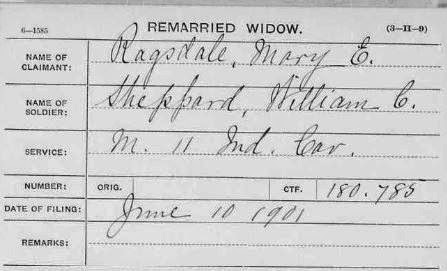 Civil War pensions were given out for many years, well into the 20th century. And the rules for dispensing them kept changing. Widows who remarried (like our Mary Shepard Ragsdale) were ineligible at first. But in 1901 (the year Mary filed for a pension) the rules were changed and a Civil War widow became eligible for a pension even if she remarried, as long as she was a widow again. That was exactly the situation with Mary and explains why she waited until 1901 to apply. Did she ever actually receive a pension? I will let you know when I find the answer to that question.

Didn't These People Know How To Spell? As indicated above, there were various spellings for the last names of William and Mary and their sons William and Frank: Shepheard, Shepherd, Shephard, Sheppard, and Shepard. Some historical records indicate that many of these folks could neither read nor write, making variant spellings understandable. Even so, the other information about them indicates they are our ancestors. It was not until after the Civil War, that "Shepard" became the common spelling for members of our family.

May Their Memory Live Forever. So this week we celebrate the 155th anniversary of the wedding of our ancestors William Shepard and Mary Sprague in 1860. But we do so realizing that theirs was a short lived marriage filled with warm love and joyful births, great hopes and terrible tragedy -- a story mutiplied half a million times during the conflict of the 1860s.

Though Mary moved on with her life as Mrs. Ragdale, surely the soldier, father and husband William Shepard retained a special place in her heart for the rest of her long life. In a similar way we, their descendants, remember their great sacrifice and honor their love for one another and their place in our family history and our nation's history. May the memory of William and Mary Shepard live among us forever.
- - -
Steve Shepard
Posted by Steve Shepard at 7:27 AM