Her voice, those silver sounds, so soft, so dear,
The listener held his breath to hear.
~Sir Walter Scott

Happy Birthday Joan! Tomorrow my cousin Joan Shepard celebrates yet another birthday. She lives with her wife Dee Shannon in Dixon, California, near Sacramento. They are the parents of grown children Ryan, Tim and Havilah. Joan's parents are the late Elmer and Beryl Swinney Shepard. What's more, she is the 8th of the 12 grandchildren of Will and Bura Davis Shepard. Joan was born and raised in the San Diego area but has lived now for many years in Northern California. Best wishes to Joan for a wonderful birthday! 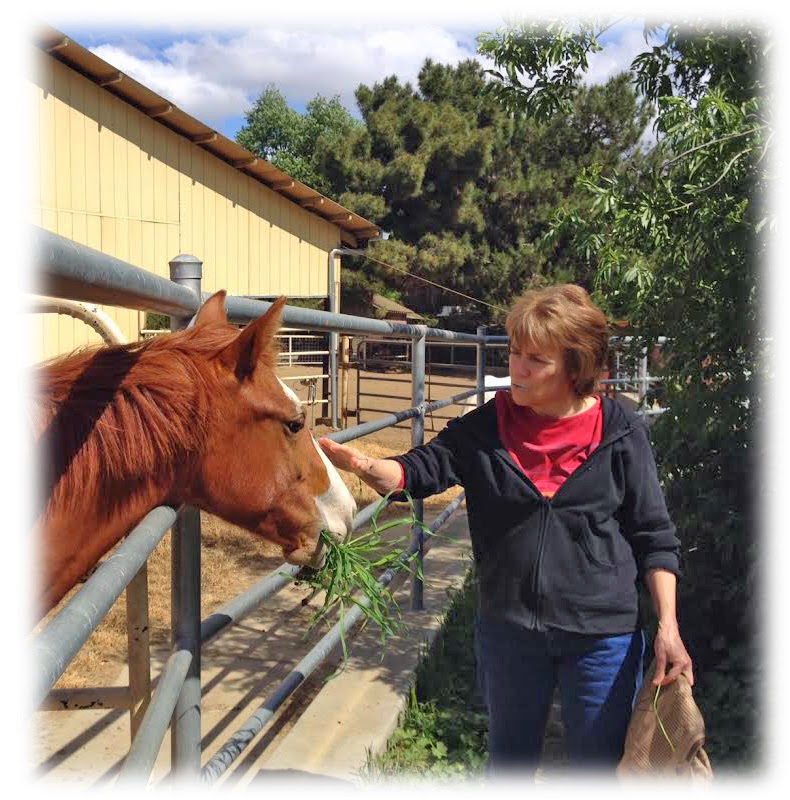 Joan: "Dee and I celebrated my birthday at the UC Davis Arboretum. We enjoyed a perfect spring day in the Sacramento Valley. It was delightful to be back in the gardens where we married just last summer. Dee loves to visit the Equestrian Center, where she took a class a few years ago and made lasting friendships with the resident horses. They and the birds seemed to celebrate the day with us. All our children and Dee's mother are enjoying life, so we feel especially blessed as time goes by."

The first picture show Joan in a recent photo taken at the abovementioned Equestrian Center of UC Davis.

The second image is from a photo taken in 1961 in San Diego and shows Joan (bottom left) with her brother Dane (behind her) and 4 of her Shepard cousins: me, Linda, Gary and Darrell (next to Joan). 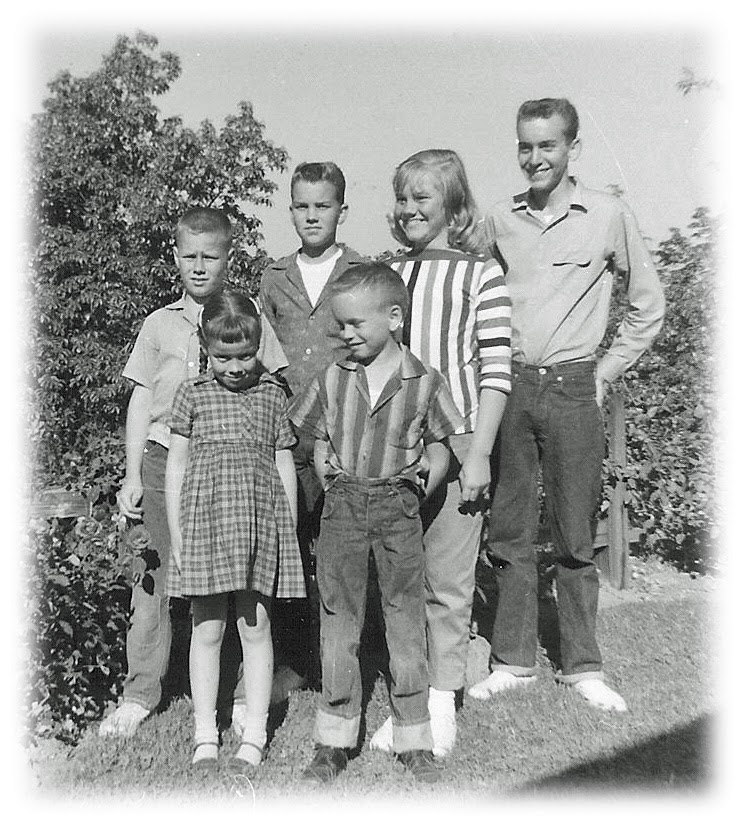 Whatever Happened To Uncle Frank? Recently I mentioned in this blog that my Great Grandfather William Elmer Shepard (1862-1915) was NOT an only child, as I had thought for many years. By the way, it is not unusual for information of this sort to turn up. New information is being made available all the time. It makes family research that much more exciting.

William Elmer Shepard had a previously unknown older brother by the name of Frank J. Shepherd. Younger brother William Elmer was born February 5, 1862, 5 months after their father left home for military service. Frank was probably born around January, 1861, since their parents were married March 11, 1860.

After I mentioned this information in a previous post, I heard from our friend Diane in Tucson who asked, "So what happened to the "other" brother Frank J. Shepard? Inquiring minds want to know." I took her response as a challenge to find out whatever I could about this newly discovered ancestor Frank J. Shepherd.

After a few hours of searching online I turned up some fascinating data. I already knew that our Great Grandfather William Elmer Shepard left Montgomery County, Indiana in a huff in the early 1880s and went south as a young man, married Elvira Owens in Madison County, Illinois, had two children, and then lived the rest of his life with his family in Beaver County, Oklahoma.

But what of his brother, my Great Grand Uncle Frank? Indiana marriage records show that older brother Frank married a woman almost 10 years his junior, named Lida Moore, in 1889 in Montgomery County, Indiana where he had been raised. The next record I found shows that in 1900 they were living 130 miles north in Plymouth, Marshall County, Indiana.

For the rest of his life Frank took the spelling "Shepherd" for his last name, while his brother William Elmer took the spelling "Shepard".  Remember, Mary Shepard, the mother of these boys, remarried when they were just 3 and 4 years old and had the last name Ragsdale for the rest of her life. Confusion about exactly how to spell their dead soldier/father's last name is understandable.

So, whereas William Elmer went south to Illinois and then Oklahoma, his older brother Frank with wife Lida went north and settled in Plymouth, Indiana. They appear in the Census Records for 1900, 1910, 1920 and 1930 in Plymouth. In most of those Census Records Frank is listed as a "mail carrier". In 1957 Lida appears in a city record for South Bend, Indiana (30 miles north of Plymouth) as the 85 year old widow of Frank Shepherd.

Frank J. Shepherd and Lida Moore Shepherd had but one child, a daughter named Frances (Flossie) Shepherd, who graduated from Plymouth (Indiana) High School in 1911. Her picture appears online in the 1911 Plymouth Senior Annual, and is included in this post. I do not know much about Flossie (yet), although the search continues. The 1920 Census (when she was 26) lists her as unmarried, living at home, and a cashier in a dry goods store. Something of the kind of person Flossie was can be gained from the quote attached to her in her High School Annual: "Her voice, those silver sounds, so soft, so dear, The listener held his breath to hear." From the looks of her picture, she could pass for the first cousin of my Grandfather William Shepard. Unfortunately Granddad probably never knew her; probably never even knew she existed.

So there you have it: two brothers, Frank J. Shepherd and William Elmer Shepard, whose father died in the Civil War when they were just infants. They were raised in their stepfather's household, but separated as young men -- perhaps under unpleasant circumstances -- probably never to meet again. But such was the fate of many Americans whose lives were torn asunder by the effects of the Civil War. We are fortunate to know as much as we do about them, and are honored to share their legacy.
- - -
Steve Shepard
Posted by Steve Shepard at 1:17 PM