Happy Birthday on this Good Friday to our son Nathan Shepard. Nathan was born here in San Diego early on a Palm Sunday in 1977. Today Nathan works for Wells Fargo Bank and lives in the San Carlos Community of San Diego with wife Chenda and children Preslea, Logan and William. An avid Hockey fan and player, Nathan also enjoys hiking in the Sierra and quality time with the family. The following photo presentation is offered in celebration of his 38th Birthday.

Happy Birthday tomorrow to Ciara Ortiz of San Diego. Ciara is the oldest child of Jeremy and Desiree Ortiz and the granddaughter of Kim Boyd Clark of Blue Springs, Missouri. She is also a Great Great Grandchild of Bura Davis Shepard and William Shepard, mentioned in the comments below. This picture shows Ciara (top) with her brother Damian, sister Ashlyn and a friend. This was posted to Facebook just a couple of weeks ago. 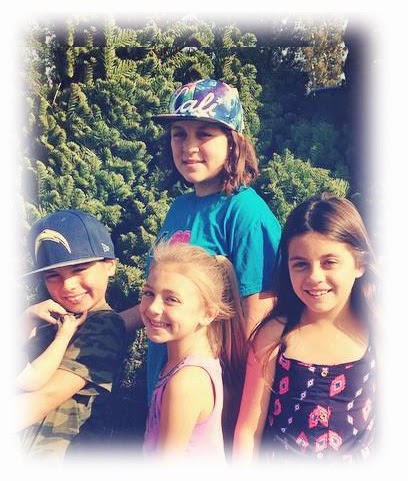 Desiree: Just wanted to give you a shout out for Ciara. Her birthday is this coming weekend. April 4 she will be the big 13. Can't believe Jeremy and I will have a teenager. It's a little scary, lol! Ciara is adjusting well to being back in San Diego. She is active in school, and a part of the basketball and swim team, as well as the photography team, putting the year book together! She is looking forward to summer so she can spend July in Missouri with Grammy and Grandpa Jeff and attend 3 weeks of Bible camp.

Three Shepard Cousins. I mentioned in my last post that newly discovered ancestors Frank and Lida Shepherd had a daughter named Flossie Shepherd. From everything we know, and from family stories I have heard, Grandad William Shepard (1888-1976) never knew he had an uncle Frank and aunt Lida, and therefore probably never knew about his cousin Flossie Shepherd (1894-1960abt.). Our best knowledge suggests that when Great Grandfather William Elmer Shepard left Indiana as a young man, he disconnected from his family and was never reunited with them. This was not only due to the fact that they had parted under unpleasant circumstances, but also because travel and long distance communication was difficult in the 19th century, nothing like it is today.

The following picture is an attempt to do something that was never done when these three were alive, and that is bring them together. This tryptic shows my Grandfather William Shepard (1888-1976), his sister Sadie Shepard Pruett (1892-1980), and their first cousin Frances (Flossie) Shepherd (1894-1960abt). The first two, William and Sadie were very close throughout most of their lives, first in Alton, Illinois and then in Beaver County, Oklahoma. But not so their cousin Flossie who lived most of her life in Plymouth, Indiana, some 1,000 miles away.

The pictures of William and his sister Sadie were taken in June 1915 in Beaver County, Oklahoma on the occasion of the wedding of William Shepard to Bura Davis. Flossie's picture was taken in June 1911 when she graduated from Plymouth (Indiana) High School. These three are the only grandchildren of Civil War soldier William Shepard (1835-1862) and his wife Mary Sprague Shepard (1840-1919).
- - -
Steve Shepard
Posted by Steve Shepard at 11:04 AM

THANKS, Steve. Very interesting and I loved meeting your son and his family. Stan

Thanks Stan for your comments!