Beauty is in the differences,
like the different notes of a chord of music,
each note with its own integrity —
together spilling out into the air
in clusters of intense harmony.
~Patricia Adams Farmer

Emma Beverly Jean Wilk. Today, June 6, is the 10th birthday of Emma Beverly Jean Wilk. She is the 7th of the 18 Great Great Grandchildren of William and Bura Davis Shepard. She and her mom Shannon Wilk live in Atchison, Kansas. Emma is the only granddaughter of the late Phillip Wilk (1935-2007) and Beverly Russell Wilk (1936-1974). 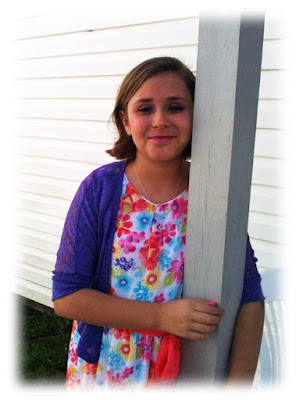 Shannon: Hi there! Emma IS growing fast. Too fast for me. She is very excited. She was bit by a dog a few days ago. No stitches. Just got scared. We've been doing okay. Although my health hasn't been good. I have another surgery coming up. Could use some prayers. Other than that we are good. Papa Frank is still kicking and stubborn as ever! The weather has been great here. But the hot humid stuff will be here soon enough. Hope you are all doing good.

With all the falderol of my last post regarding the 100th Anniversary of William and Bura Davis, I did not mention that they were married on the 45th birthday of Bura's father James Brooks Davis. He is a significant person in our family history, being the one who picked up his young family of 9 in 1913 and moved them from Indiana to Beaver County, Oklahoma. 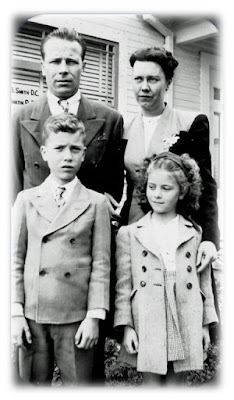 My grandmother Bura, 16 years old at the time of their move, was the oldest of the 7 children. She had the tremendous responsibility of helping her parents watch over her 6 siblings (ages 5-15), plus her mother's special needs brother Clayton Spear, who also made the move with them. It is very understandable that within 2 short years of arriving in Beaver County, Oklahoma, Bura had met country neighbor William Shepard and was ready to marry him and get out on her own.

This second picture shows Beverly Russell, the grandmother of Emma Wilk, pictured above. Beverly is shown here (lower right) next to her brother Rex, in front of her parents Bill Russell and Pauline Shepard Russell. This family picture was taken in San Diego, probably about 1945. I am not sure why these folks look so stern. I remember them as being happy, pleasant people. Is that a sign for a dentist office in the window behind them? Perhaps that explains their demeanor.

A final thought. After using the word "falderol" in a previous paragraph I decided to look it up just to make sure I was using the right word. Here are some Merriam-Webster Dictionary synonyms for falderol: "balderdash, baloney, blather, blither, bull, claptrap, codswallop and crapola." Turns out it is a much more meaningful (and colorful) word than I ever anticipated!