My father gave me the greatest gift
anyone could give another person.
He believed in me.
~Jim Valvano 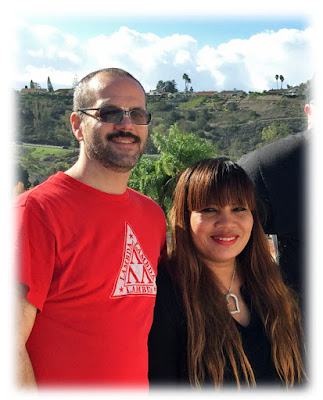 Tomorrow, June 21, is the anniversary of our son and daughter-in-law, Nathan and Chenda Sou Shepard, who were married on June 21, 2009. On that day 6 years ago Father's Day, their anniversary, and the Summer Solstice all occurred on June 21, a rare occurrance that happens again this year. Nate and Chenda live in San Diego with their 3 children Preslea, Logan and William. Happy Anniversary to Nate and Chenda!

This first picture shows Nate and Chenda at their home on Dicenza Way here in San Diego.

Tomorrow is also the day we honor all father's in our midst. And we remember those fathers who have gone before us. I want to mention two in particular: my grandfather Leroy Gower and my brother in law Joe Paul Harris. Though they have been gone for many years, these two are remembered warmly by those who knew them as father and grandfather. 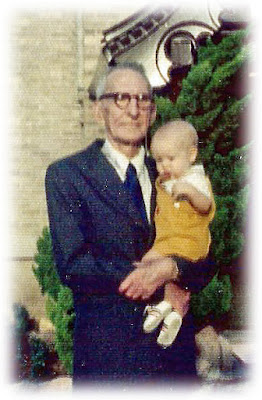 Leroy Gower (1899-1974) was a turn of the century baby, born June 25, 1899. Originally from a small farming family, he was born 116 years ago near Mountain View, Arkansas. He and his wife-to-be Nola Shannon were from the same small farming community west of Mountain View and probably knew each other as children. When they married in Arkansas she was a teenager and he was just 22 years old.

After just a few married years -- and the birth of their first two children -- he and Nola moved westward and settled in Okemah, Oklahoma. After 17 years there they moved on to San Diego where they lived most of the rest of their lives. Leroy (and Nola) had the rich opportunity to live in fairly close proximity to their 3 children and their 12 grandchildren in San Diego as they watched them grow to adulthood.

The above picture of Leroy was taken in 1973 -- just a year before he died -- on the occasion of an unknown funeral at the Little Chapel of the Roses in Glen Abbey Cemetery in Chula Vista, California. Do any of you know who the funeral was for? It was a service attended by several Gower and Shepard family members. Leroy looks to be holding his great granddaughter Kelly Shepard. 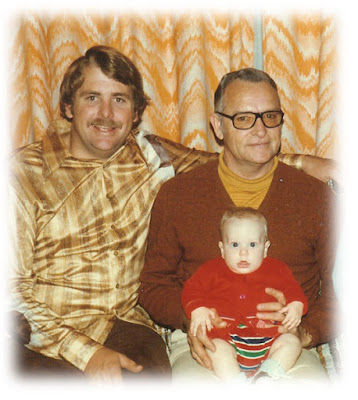 Joe Paul Harris (1950-2009). On this weekend of Father's Day, I am also remembering Joe Paul Harris, my wife Cindy's brother, who was a midcentury baby, born June 23, 1950, 65 years ago this coming Tuesday. He died in the spring of 2009 in Naknek, Alaska where he had lived the last 20 years of his life. He and his wife Jane raised their 3 children in San Diego. This picture of Joe Paul shows him with his father Joe Harris and his first born child, Cadence Harris Martin, in 1975.

Also On This Weekend.  In celebration of the above mentioned men, and all the fathers in our extended family, I offer the following updated Father's Day presentation with music by Michael Buble, which honors fathers in our family through the years.