Family life is like photography,
we develop from the negatives.
~author unknown

Make your plans for our upcoming Family Reunion, this Saturday, August 22 at the home of Pat and Nicole Shepard in Bothell, Washington, 2 pm. See you there!

Happy Birthday today to my niece Linda Shepard of Anacortes, Washington. 22 years ago today she was born in the city where she and her family still live today. Linda and boyfriend Jamie Stockmoe live next door to her parents Russ Shepard and Pam Engan Shepard, also of Anacortes. Linda is the youngest grandchild of Maida Shepard. She is also one of the great grandchildren of both Leroy and Nola Gower, and William and Bura Shepard. 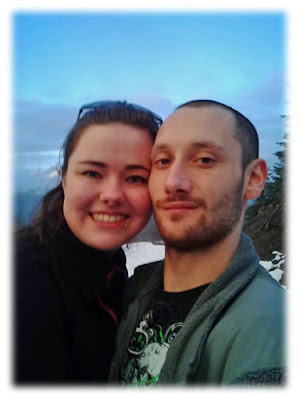 This first image shows Linda and Jamie from a picture that was taken this past winter. Linda says: "I put my notice in at my current job and will be moving to a different company while focusing more on nursing school. My eyes will be open to places to move as Jamie and I are ready to get out and see the world other than Anacortes. I am doing well otherwise and hope this year will bring a new and exciting chapter."

Best wishes to Linda for a wonderful birthday!

More Never-Before-Seen Family Pictures. Throughout this summer I have been sharing with you several family pictures that I have never shown before in this venue, for a variety of reasons. But now, it seems to me, the time is right to include some family photos in this blog that I have been unwilling to share until now.

This second picture was taken in Idyllwild, California at Thanksgiving, 1975. It shows Cindy and me sitting on the couch in the living room of the mountain home of my Uncle Bill Russell and Aunt Pauline Shepard Russell. Next to us is my youngest brother Russ, a 13 year old Junior Higher at the time. 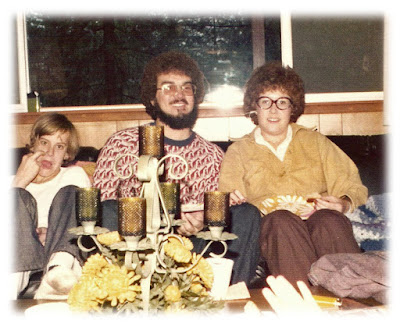 I have passed over this particular picture a number of times and have never included it in a blog post. Not because of my frizzy hair do, which many of us guys were going with back in the crazy '70s, a phenomenon that today seems amusing -- to say the least. Actually that would have been reason enough to push this picture to the bottom of the stack. But no, there is another reason this particular picture has remained unused in The Shepard's Crook.

Back in the "the day" young teenagers considered it cool to surreptitiously "give the finger" to the camera when school pictures or family pictures were taken. That is what Russ is doing here. He is trying not to be too conspicuous about it, but his intent is clear nonetheless. He was, of course, not the first to do this. He undoubtedly learned it from siblings or friends.

The third picture I am sharing with you is another example of this same thing, although it is not nearly as obvious. You have to look closely at Russ in the bottom left to see him cleverly "flipping the bird" to the camera. With both hands. 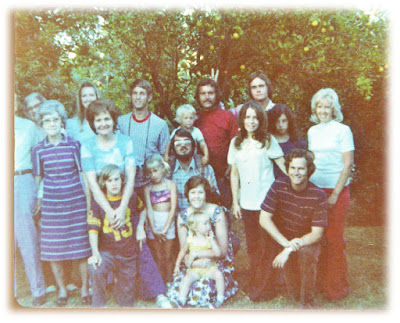 This is actually quite a remarkable family picture, showing a unique collection of family members. I have a note indicating that this picture was taken in 1975 at the home of my Grandparents William and Bura Shepard, in Lakeside, California. This would have been when they lived next door to their son and daughter in law, Elmer and Beryl Shepard. Unfortunately half of Granddad William is accidentally cut out of the picture on the left. Next to the part of him that you can see, is Grandmother Bura in the blue dress. Behind her, peeking over her shoulder, is my other Grandmother Nola Shannon Gower. I think this is the only picture I have of my two grandmothers together at the same family gathering.

Also in this picture, across the back, from left to right, are Jane and Jerry Clark, Gary Shepard, Darrell Shepard (placing rabbit ears on his unsuspecting brother Gary!), Kim Boyd (almost hidden) and Jackie Enderle Shepard on the far right. In front of Jackie, from right to left, are Dane Shepard, Joan Shepard, Jason, me, Cindy and Kelly Shepard, then Kerri Shepard (the shy young one with the bare midriff), and finally my mom Maida Shepard with two-fingered Russ in front of her.

Disclaimer: If you choose to share this post with your teenage children or grandchildren, do so at your own risk.
- - -
Steve Shepard
Posted by Steve Shepard at 4:42 PM