Celebrating 9 Years of Marriage! Happy Anniversary today to Chris and Amanda Farrell. Amanda is one of the daughters of Jerry Clark and Jane Clark Brock of Lubbock, Texas. 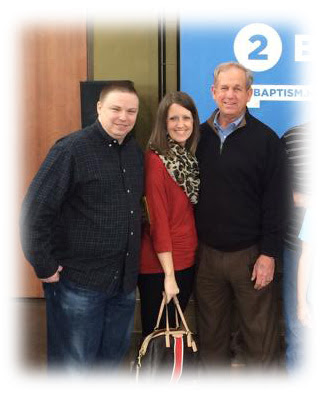 Chris and Amanda, who live today in the Dallas, Texas area, were married 9 years ago in Texas. The first picture shows Chris and Amanda with Amanda's Dad Jerry Clark, in a picture taken earlier this year.

Never Before Seen Photos. In this post I would like to continue a theme that I began a few weeks ago. And that is sharing photos that you have never seen before, at least not in this venue. You may never have seen the picture above, but that is simply because it was taken recently. I am talking about family pictures that may be a few years old -- or many years old --  that have never appeared in The Shepard's Crook, which has been including pictures in nearly 500 posts, over the last 8 years now. 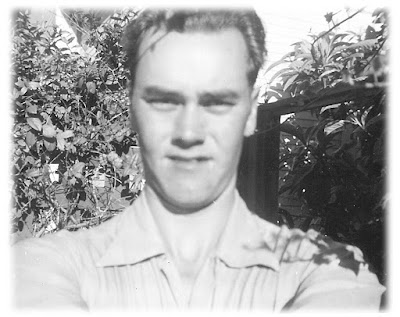 I have chosen not to share some pictures simply because of the poor quality. Here is one such example, an image probably from the early 1940s, possibly earlier. It is a photo of my Dad Eugene Shepard taking a "selfie", with him holding the camera. It was taken some 75 years ago! The term "selfie" has only been around a few years.

These days pictures of oneself are common, with countless numbers of them appearing in social media daily. But in the first half of the 20th century? I dare you to find a family selfie older than this one. No, really. If you can find one older than this, I will gladly post it for all to see.

This selfie that Dad took is actually not that bad, considering how long ago it was taken, and the limitations of most popular cameras back in the 1940s. The plants behind Dad in this picture are in focus, even if Dad is not. 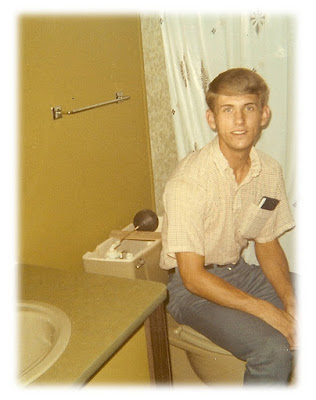 Speaking of selfies, click here to see an attempt at a selfie that went terribly wrong! It happened just last week when my granddaughter and I were learning to use a "selfie stick".

Here is one more image that I have never shared before in this blog. Since Jerry Clark appears in the first picture above with his daughter Amanda, it only makes sense to include another picture of him, this one of a very handsome young Jerry, taken 45 years ago.

It was taken in the San Diego home on Lynne St., of my Grandparents Leroy and Nola Shannon Gower. The picture is dated July, 1970, the month before his marriage to my sister Linda Shepard. The reason I have never shown this picture before should be obvious: one should use the utmost discretion when making public the picture of a family member sitting on the toilet.
- - -
Steve Shepard
Posted by Steve Shepard at 4:18 PM