Tradition means giving votes
to the most obscure of all classes
-- our ancestors.
It is the democracy of the dead.
~Gilbert Keith Chesterton

This week celebrates the birthday of my Great Aunt, Sadie Shepard Pruett, the only sister of my Grandfather William Shepard. She lived from January 27, 1892 until January 29, 1980. 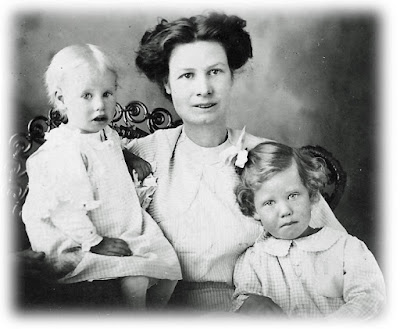 My Granddad William Shepard was 3 years older than his sister Sadie, both of whom were born in Madison County, Illinois, just across the river from Saint Louis, Missouri. They were teenagers when their parents William Elmer Shepard and Elvira Owens Shepard, moved the family in 1905 to Beaver County, Oklahoma.

The United States Census of 1910 shows that, in the small farming community of Logan, Beaver County, Oklahoma, the William Elmer Shepard family was a close neighbor of the Charles Edward Davis family. One of the Davis granddaughters was Bura Davis, who in 1915 became the bride of Sadie's brother William Shepard. That union created a bond between the Davis and Shepard families that continues to this day.

(Side Note: on this day 167 years ago -- January 29, 1849 -- the aforementioned neighbor of the Shepards', Charles Edward Davis, was born. He was the grandfather of my grandmother Bura Davis Shepard.) 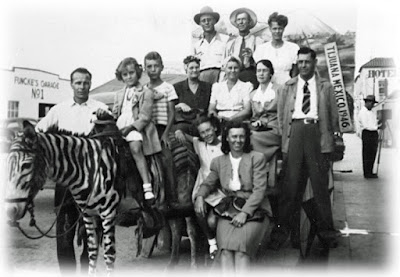 I never knew my great aunt Sadie Shepard Pruett despite the fact that our lives overlapped by several decades. She visited her brother William Shepard and his family in San Diego in the 1940s, this second remarkable family picture having been taken on one such visit. It shows Sadie (in the dark dress in the middle) and husband Levy (middle of the top row) with other Shepard and Russell family members while visiting the border town of Tijuana in 1946.

Though she visited family in California, Sadie never lived any farther west than rural Beaver County. In 1910, at just 18 years old, she gave up her teaching job in the local public school to marry Levy Pruett who was 12 years older than her. They had 3 daughters: Alberta, Gayle and Twila. The first picture (above) shows the beautiful young mother and wife Sadie at 23 years old with her first two daughters Alberta and Gayle. This lovely picture may actually have been taken on the occasion of the marriage of her brother William Shepard to Bura Davis.

Sadie is buried alongside her husband Levy Pruett in the Sophia Cemetery near Elmwood, Oklahoma. That cemetery is just around the corner from the South Flat Church of Christ, a congregation which was dear to the hearts of many of our Shepard and Davis family members in the early years of the 20th century. 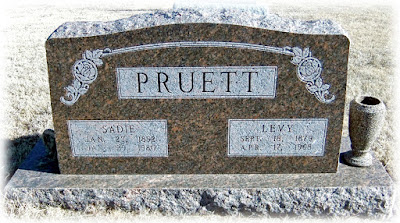 Unfortunately there has been very little communication over the years between the descendants of Sadie Shepard Pruett and her brother William Shepard. Today, many of the Shepards live on the West Coast, while many of Sadie's descendants live in and around Oklahoma. Perhaps that lack of interaction will change as generations go by and as the internet makes possible greater communication between distant relatives.

Seeking Valentine's Day Pictures. As I mentioned last week, I am putting together a family photo presentation for Valentine's Day. If you have a "kissing picture" including family members, you are welcome to send it to me for inclusion in this fun photo slide show.
- - -
Steve Shepard
Posted by Steve Shepard at 4:59 PM

Lisa said...
This comment has been removed by a blog administrator.
7:13 AM