Happy are those who don't fear to see the sun go down,
but instead look forward to watching the stars come out.
~Mary's Motto

January 6 is celebrated throughout the Christian world as Epiphany, the day that commemorates the bright star that led the three wise men to the manger in Bethlehem. Three girls of our larger family are celebrated in today's post. Their ages, where they live, and their immediate families vary considerably, but they are all shining lights of this growing clan that unites us all. 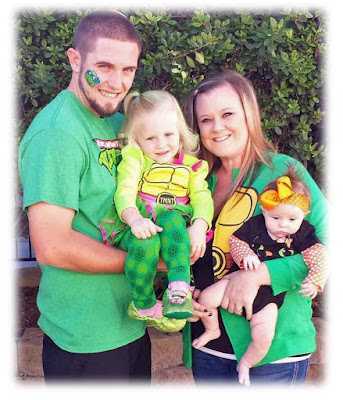 Carsyn Slaughter. Yesterday, January 5, was the third birthday of Carsyn Slaughter, daughter of Cody Slaughter and Courtney Boyd, who is a Granddaughter of Thelma Boyd. Carsyn is one of the Great Great Grandchildren of my grandparents William and Bura Davis Shepard. Carsyn and her immediate family live outside San Diego in Alpine, California. Her proud grandfather is Darren Boyd of Coronado, California.

This first picture shows "Ninja Turtle" Carsyn being held by her dad Cody, alongside her mom Courtney and little sister Camryn, the newest member of their family, who was born last summer. "Happy Birthday!" to Carsyn and best wishes to her family. 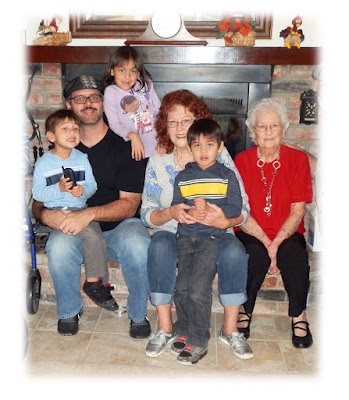 Cindy Harris Shepard. Tomorrow, January 7, is the birthday of my wife Cindy Harris Shepard. Born in Visalia, California in the San Joaquin Valley, she came with her family to San Diego as a baby. Today Cindy and I live the retired life in San Diego and enjoy our kids and grandkids. Cindy is proud of her Native American (Chickasaw) heritage, which she can trace for at least 5 generations through her mother Paula Harris and maternal Grandmother Rosa Krause.

This second picture was taken back in November and shows Cindy in the middle with her mom Paula Harris on the right, her son Nathan on the left, and our 3 grandchildren William, Preslea and Logan Shepard scattered throughout. 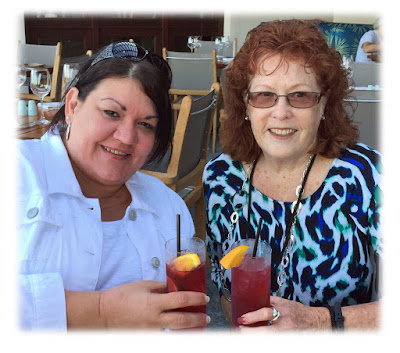 Mary Medina Shepard. This coming Sunday, January 10, is the birthday of Mary Medina Shepard, the wife of my brother Darrell Shepard. Originally from Worth, Illinois (a suburb of Chicago), Mary lives today with her family in Bothell, Washington. She is the Executive Director of Emeritus Senior Living in nearby Everett, Washington, and loves to spend time with her and Darrell's four grandchildren, Logan, Mason, Kellan and Finley. As Mary puts it, "the biggest joy in life is being a Grandma!"

This third picture shows Mary with sister-in-law Cindy Shepard, taken in San Diego last spring when Mary and Darrell were visiting in Southern California and having dinner at a restaurant in Mission Beach.
- - -
Steve Shepard
Posted by Steve Shepard at 3:48 PM