Best wishes to all of you for a wonderful new year! May 2016 bring much happiness, personal growth, and great joy. 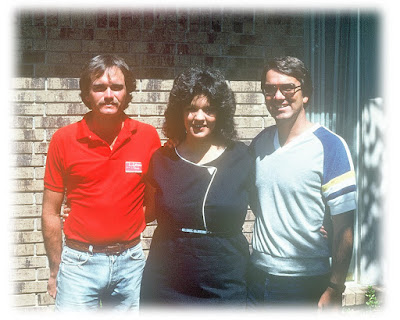 Happy Anniversary Darrell and Mary. Happy 33rd Wedding Anniversary today, December 31, to my brother Darrell Shepard and his wife Mary Medina Shepard of Bothell, Washington. They were married in Abilene, Texas while students at Abilene Christian University. In the last third of a century their family has grown to a clan of 12 including three children and 4 grandchildren, all of whom live near them in the Seattle area. Happy Anniversary to Darrell and Mary, and best wishes for many more years to come!

This first picture shows Darrell and Mary with me on the right, in late 1983, just before they celebrated their first wedding anniversary. It was taken in Abilene, Texas where they were living at the time.

Remembering James and Callie Davis. Tomorrow is the wedding anniversary of my great grandparents James Brooks Davis and his wife Callie Spear Davis. They were married in Owen County, Indiana on New Year's Day, 120 years ago. Their decision to marry on the first day of the new year was understandable. A new year, a new marriage, a new beginning; it all fit together. For farming families it was also a slow time of the year work-wise. And if the weather was not too bad, family and friends from all around would be available to celebrate with them. 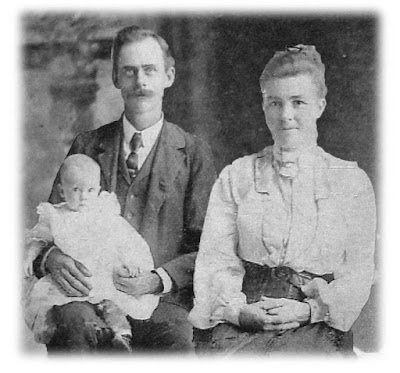 Their new year's day marriage so impressed their youngest daughter Marjorie Davis Millikan that she too decided to marry on that day. And not once, but twice! First in 1931 to John Millikan, the father of her children, and then 50 years later to Clyde Williams in 1981.

This second picture was taken in 1908, just a few months after their youngest child, Marjorie Davis, was born in Spencer, Indiana, and just a few years before the family moved to Beaver County, Oklahoma. This picture shows parents James and Callie Davis with baby Marjorie.

Happy Birthday Chenda! New Year's Day is also the birthday of our daughter-in-law Chenda Sou Shepard. She was born in Phnom Penh, Cambodia on the first day of 1980. She lives in San Diego with husband Nathan Shepard and their three children Preslea, Logan and William. 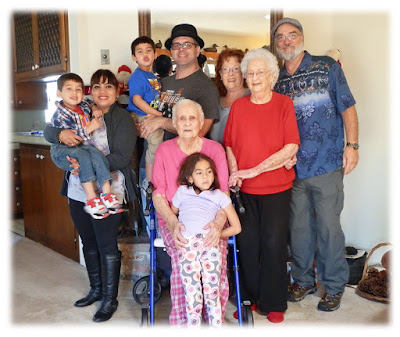 This third picture was taken just last week on Christmas Day in San Diego at the home of Cindy's mom Paula Harris. Chenda is on the left holding their youngest child William Shepard. Next to Chenda in the back are Logan with Nathan, Cindy, her mom Paula and me on the far right. In front are Cindy's aunt Juanita Eeds with Preslea in front of her.
- - -
Steve Shepard
Posted by Steve Shepard at 7:18 PM