We must welcome the future;
soon it will be the past;
and we must respect the past,
remembering that it was once
all that was humanly possible.
~George Santayana

Happy Anniversary! Tomorrow, Sunday Dec 27, is Cindy's and my 47th wedding anniversary. We were married here in the San Diego area two days after Christmas in 1968 and were home for Christmas break from Abilene Christian at the time. Over those years our home has been in various places throughout California: San Diego, San Leandro, the San Fernando Valley, Los Alamitos, Palo Alto, and Dorrington. 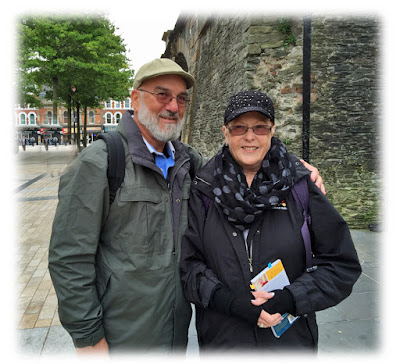 This first picture was taken this past September when we were on vacation in Northern Ireland, a trip that was one of the highlights of 2015 for us. This particular picture was taken in Derry, Northern Ireland, a beautiful modern city, the port from which a number of our Irish ancestors sailed to America in the 19th century. Behind us in this picture are the ancient walls that surround the oldest portion of this city.

Remembering Pauline Shepard Russell (1916-2000). Monday, December 28, is the anniversary of the birth of my late aunt Pauline Shepard Russell, who was born 99 years ago in Beaver County, Oklahoma. Pauline was the oldest child of William Shepard and Bura Davis Shepard. She was the first child in their family to marry when she tied the knot with Bill Russell in 1935. They were the first to provide the Shepards with grandchildren when Rex and Beverly Russell were born to them in the late 1930s in Two Buttes, Colorado.

My aunt Pauline and her husband Bill Russell with their two children were part of the Shepard family migration to San Diego in the fall of 1940. Pauline lived the rest of her life in the San Diego area and is buried today in Greenwood Cemetery, alongside her husband Bill. The two of them have 3 direct descendants today: their granddaughter Shannon Wilk and her daughter Emma of Atchison, Kansas, and their grandson Eric Russell of Reno, Nevada. 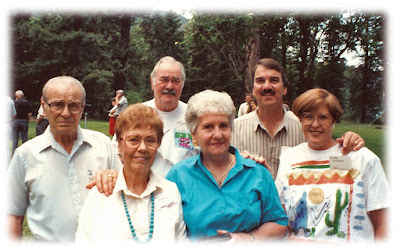 This second picture was taken almost 25 years ago at a family reunion in Lake Wallawa, Oregon in the summer of 1991. Pauline in on the left with her husband Bill Russell. Next to them are my parents Eugene and Maida Shepard, and on the right are me and Cindy.

8 Years and Counting. It was 8 years ago on December 28 that I began this family genealogical blog. My very first family blog post on December 28, 2007 was a simple announcement about the Shepard/Gower family reunion that was coming up in the summer of 2008.

In the past 8 years in over 500 posts, I have made available over a thousand family pictures, have told countless stories about our family, and shared many posts regarding research I have done. Many of the stories I recounted from my own experience, while others I have uncovered through researching this big, diverse family of ours. Not only the Shepard, Gower, Davis, and Shannon branches, but other tributaries as well. Fortunately there are reliable online records that tell us of family that goes back several centuries in some instances, and more records are being made available online all the time.

I look forward to many more discoveries of ancestors that help us to understand who we really are and where we have come from. Thanks very much for the support of so many of you and for all who are readers of this blog. It has been a wonderfully rewarding experience for me and one that I hope to continue for many years. As always, I solicit your input into this effort in the form of new or old pictures as well as comments, celebrations, reflections, remembrances and any other contributions that would be appropriate to share in this venue. We are part of a great family that is worth remembering and celebrating!
- - -
Steve Shepard
Posted by Steve Shepard at 6:04 PM