Look deep into your heart
and you shall find that it is only
that which has given you sorrow
that is giving you joy.
~Khalil Gibran

One of the more fascinating, compelling -- and heartbreaking -- stories in our family tree concerns a woman named Mary Shepard. Not my brother Darrell's wife Mary Medina Shepard. She is the most contemporary "Mary Shepard" in our family. But I am referring today to a different Mary Shepard. This one is my Great Great Grandmother Mary Sprague Shepard.

Here is her lineage:


Mary Sprague Shepard was born January 25, 1840 in Montgomery County, Indiana, some 50 miles west of Indianapolis. When barely 20 years old she married a young man 5 years older than her, named William Shepard (the first of several "William Shepards" in our family) on March 11, 1860, also in Montgomery County. Later in 1860 William and Mary moved because of a job opportunity, to Wabash, Indiana, 80 miles north of Indianapolis, where Mary gave birth, in early 1861, to their first child Frank. 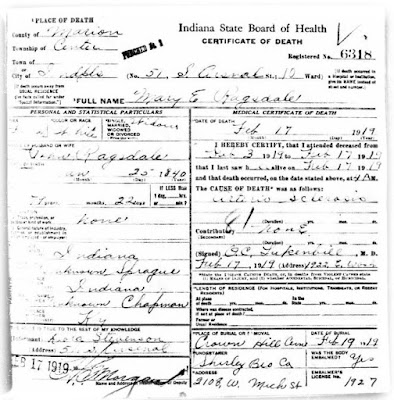 In May of 1861 Mary became pregnant with their second child. But before the baby was born, husband William went off to fight in the Union Army. In February, 1862, the very month that Mary's second child William Elmer was born, husband William was injured in battle at Bowling Green, Kentucky, and was sent to a hospital in Evansville, Indiana. There the soldier William languished for 5 long months before he died on July 22, 1862 (154 years ago today), in all likelihood never having seen his second baby boy.

Enough Sorrow and Joy For a Lifetime. So between March 11, 1860 and July 22, 1862 -- a period of just 27 months -- the following occurred in the life of Mary Sprague Shepard: she and William were married, she gave birth to their first child Frank, she got pregnant with their second child, her soldier husband left home for active duty, she gave birth alone to their second child William Elmer, and finally she became a Civil War widow. In just a little over 2 years she experienced enough joy and heartbreak, enough happiness and sorrow, to last her a lifetime. When you take into account that William left for the war in September, 1861, their married life together only lasted 18 months! But what an amazing time it was.

We know almost nothing about Mother Mary after her husband William died, until 1865. That was the year the Civil War finally ended and a new chapter in the life of our nation arrived after incredible destruction, death and sorrow. 1865 was also the year Mary's life changed. On November 12, 1865, back home in Montgomery County, Indiana she married the widower William Ragsdale, a father of 9 children who was 23 years her senior but who provided well for her and her two young boys. Mary and Mr. Ragsdale made a good life together for the next 22 years until he died in 1887 in Ladoga, a farming community of Montgomery County. About 1904 an aging Mary Shepard Ragsdale left the farm and moved into Indianapolis, probably to be near some of her children, and lived there until she died in 1919. 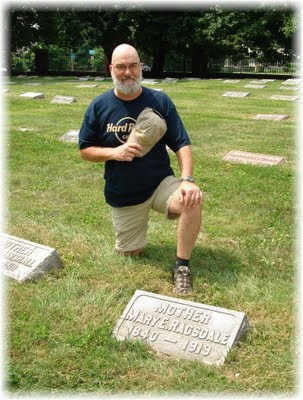 Recent Discovery. The first image (above) is a copy of Mary's death certificate, which I recently found online. Nearly 100 years old, this document fills in a few of the many gaps we have in our knowledge of Great Great Grandmother Mary Ellen Sprague Shepard Ragsdale and her family. It shows she died February 17, 1919 at 79 years old, of Arterio Sclerosis in Indianapolis. It also shows that her father was a native Hoosier, while her mother, whose maiden name was Chapman, was from Kentucky. It also shows that she was buried at Crown Hill Cemetery in Indianapolis, which I already knew, having visited her grave there in 2011 (see second picture).

2X Great Grandmother Mary only carried the Shepard name from 1860 to 1865, but she remains an outstanding figure in our family history. She is a person whose story needs to be remembered for generations to come, for its pathos and inspiration, and for its direct family connection to a most tragic yet formative time in the history of our nation and our family.
- - -
Steve Shepard
Posted by Steve Shepard at 1:08 PM