How many tumbles must it take
before you learn to fly?
I'm going to help you spread your wings,
my universal child.
~Annie Lennox 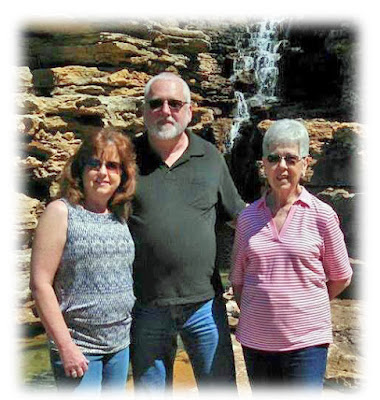 Jeff Clark is the husband of my cousin Kim Boyd Clark, who is one of the 12 grandchildren of William and Bura Shepard. Jeff and Kim live in Blue Springs, Missouri, near Kim's mom Thelma Shepard Boyd, and several of their family.

Kim posted the following on Facebook this morning in celebration of Jeff's big day: "Happy birthday to my hubby eating breakfast with Amanda Ortiz Davis then off to the airport heading to Texas to watch the Kansas City Royals play the Texas Rangers for Jeff Clark's birthday weekend. I have pain pills in tow and doctor approved this trip." Best wishes to Jeff for a very happy birthday celebration. Go Royals!

This first picture shows Jeff with his wife Kim on the left and Kim's mother Thelma Boyd on the right. 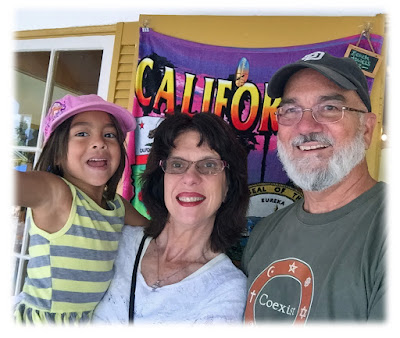 Barbara Shepard. This day is also the birthday of my sister Barbara Shepard. She is the fifth of the six children of Maida and the late Eugene Shepard. Barbara, like all her siblings, was born and raised in San Diego. For most of the last 38 years she has lived in Anacortes, Washington, where she is one of the primary caregivers of our mom Maida, in addition to being the friendliest check-out clerk at Safeway.

She is celebrating her birthday by taking a trip to the big city with a friend to visit one of her favorite places: the Seattle "Experience Music Project" Museum. Best wishes to Barbara for a memorable birthday!

This second picture shows Barbara in the middle with me on the right and granddaughter Preslea on the left.

William Shepard. And finally, this day is also the birthday of our youngest grandson William Quincy Shepard, who is named after several William Shepards in our family, including his 4X Great Grandfather, Civil War soldier William Shepard (1835-1862), who I blogged about last week. Birthday boy William, the youngest son of Nathan and Chenda Shepard, lives in the San Carlos Community of San Diego with his family, including big brother Logan, and big sister Preslea.

The following YouTube Slide Show, with scenes primarily from the last year, celebrates William's 4th birthday, and is set to the music of Annie Lennox.