Remembering Bill Russell. My uncle, Willie Davis Russell, is a man worth remembering. Married to my aunt Pauline Shepard, he was a remarkable person with a wonderful, positive influence on our Shepard family for most of his life. Bill was born in this month of October, 108 years ago, in Ellis County, Oklahoma, just east of Beaver County where my Shepard grandparents settled in the early 20th century. Their oldest child was Pauline Shepard whom Bill married in January, 1935 when the Shepards were living in the little town of Two Buttes, Colorado.

In September of that same year, 1935, Bill's father John Russell died in Kansas. Bill's widowed mother Cora Hamilton Russell went to live in Tennessee with family, and Bill's attachment to the Shepard family became even more significant. Bill and Pauline lived in Southeast Colorado for 5 years after getting married, and bore their 2 children there, Rex and Beverly.

They and their children then migrated to San Diego in 1940 with Pauline's parents William and Bura Davis Shepard and their other 3 children. It was a time of tremendous migration into California after the bleak dust-bowl years in Oklahoma and Colorado, as people sought improved economic opportunities. Even though their move to the West Coast separated them from their extended family and their historical roots, it was a positive move for the Shepard family. We flourished in the post war years in San Diego, and experienced several decades of growth and happiness throughout the second half of the 20th century. 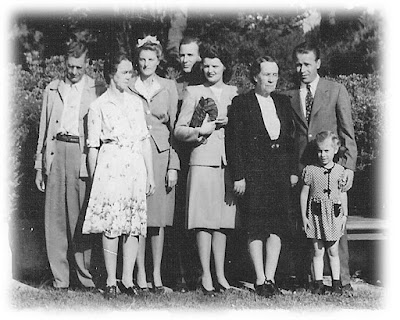 The 1940 US Census shows that when they lived in Colorado, Bill worked as a "Tractor Man" in "Road Construction." Bill developed a serious bone disease as a young man, requiring the amputation of one of his legs. So when they settled in San Diego, his vocational pursuits had to change. He worked as an accountant and a notary public and made an excellent living for himself and his family. He and Pauline were very positive people, always helpful to the rest of the family, and even took Bill's prosthetic leg with an appropriate amount of good humor.

The first picture (above) was taken in San Diego about 1945, probably in Balboa Park. It shows Bill Russell on the far right with his daughter Beverly in front of him. Next to Bill is his mother Cora Hamilton Russell who was visiting in San Diego at the time. On the far left are my grandparents William and Bura Davis Shepard. The other people are unidentified family friends.

The Russells' first home in San Diego (the first home owned by any of the Shepard clan in California) was purchased in the early 1940s in North Park on Ohio Street. In the 1960s they bought their second home in the eastern part of the city off El Cajon Blvd. on Mandalay Place, a new modern home where many memorable family gatherings took place. 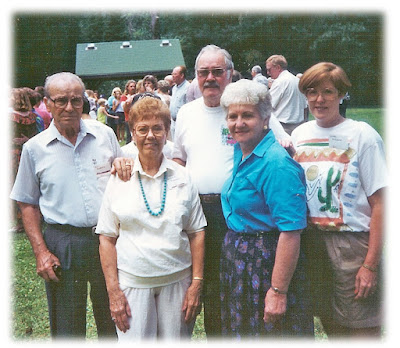 This second picture shows Bill and Pauline Russell (on the left) in the summer of 1991. With them are my parents Maida and Gene Shepard, and my wife Cindy. This picture was taken in Lake Wallowa, Oregon at a family reunion.

Bill and Pauline lived out their days in San Diego. Bill died in the summer of 1997 at 88 years old. He and Pauline are laid to rest in a section of Greenwood Cemetery in San Diego where more than a dozen other family members have their final resting place.

Bill and Pauline have three descendants living today. Their grandson Eric Russell of Reno, Nevada, son of their first born, Rex Russell. And Shannon Wilk and her daughter Emma Wilk of Atchison, Kansas. Shannon is the daughter of Bill and Pauline's daughter Beverly Russell Wilk.

Both Bill and Pauline will always have a special place in the history of our family, and are remembered fondly by all of us who knew them.

Happy Birthday Finley! The foregoing is a look back at the oldest family member of my parents' generation. The following celebrates the life of the youngest member of my grandchildren's generation. 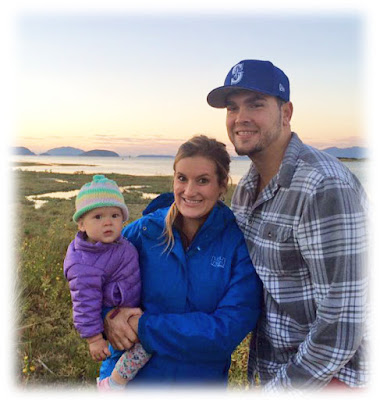 Today is the first birthday of Finley Grace Shepard, the daughter of Jessica Bell and my nephew Christopher Shepard of Seattle, Washington. Chris is the son of Mary Medina Shepard and my brother Darrell Shepard of Bothell, Washington. Finley is also the youngest of the 11 Great Grandchildren of my mom Maida Gower Shepard.

This final picture shows little Finley with her parents Jessica and Chris. This picture was taken last month when they were visiting Finley's Great Grandmother Maida in Anacortes, Washington.
- - -
Steve Shepard

Posted by Steve Shepard at 1:32 PM