Family is like branches on a tree.
We all grow in different directions
yet our roots remain as one.

The Shepard-Davis-Pruett Clan. In my last post I mentioned that I had recently connected online with a second cousin of mine, Lisa Allred Parks who lives in Haltom City, Texas. She emailed me a picture of my Shepard grandparents (and a host of other kinfolk), one than I had never seen before and am very grateful to have. Here's the picture (you can enlarge it by clicking on it):

I have a similar picture that has been in my archives for many years, that was taken at the same location, probably at the same time, but includes only a few of the people pictured here (you can see that picture below).

On the back of Lisa's copy of this first picture it says it was taken in the summer of 1945 in Beaver County, Oklahoma, at the home of Perry Jenkins (the husband of Esther Davis Jenkins, sister of my grandmother Bura Davis Shepard).

William Shepard's family was fairly small in number. His immediate family consisted of his wife and 4 children, a son-in-law and 2 grandchildren, all of whom were living in San Diego in 1945. He had just one sibling Sadie Shepard Pruett (possibly the one pictured next to William in the back, with only her head visible). Sadie, with husband Levy Pruett (pictured far right in the back), had 3 daughters. All 3 daughters - Alberta, Gayle and Twila - are pictured here with the husbands of Alberta and Gayle. Twila is the mother of Lisa Allred Parks, who graciously sent me this picture. 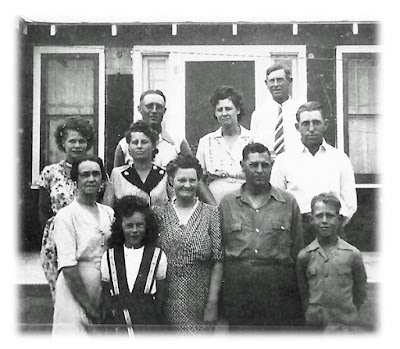 My Grandmother Bura Davis Shepard had 6 siblings, all of whom were married with kids at this time, which meant a much larger extended family. Among Bura's siblings in the first picture are Marjorie Davis Millikan (in the very center, white dress with brooch) and Esther Davis Jenkins to the left of Marjorie. William and Bura's daughter Thelma is in front, the third in the line of 4 young girls. The elderly lady on the right is Thelma's grandmother, Callie Spear Davis, mother of the Davis children in the first picture.

I am not able to identify all the folks in the first picture above (if you can, please let me know), yet they are all happy participants in this Shepard-Davis-Pruett clan gathering 71 years ago, on the dusty plains of the Oklahoma panhandle. It's a reminder of a different era when our families were expanding, some moving westward to the coast, all developing their own identity and growing their own family circles. Despite the many years that have passed, we are still united by that bond of connection to common ancestors, most of whom are gone now, but all of whom are respectfully remembered.

Happy Birthday Mandi! Today is the 24th birthday of Mandi Aquiningoc of Granbury, Texas. Mandi is the Granddaughter of my brother Gary Shepard and Jackie Perry, and is the daughter of Kerri Aquiningoc. Mandi was born and lived in San Diego but has been in Texas now for over 15 years. 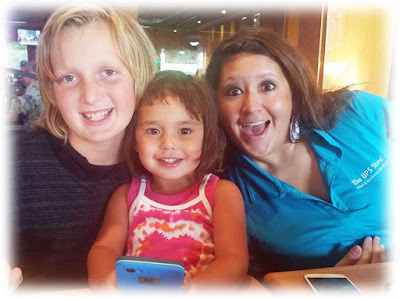 Mandi: Hi uncle Steve! It's always good to hear from you. Kambree and I are doing great. She has definitely grown a lot since the last time we saw you and Great Grammie a few years ago. She turned 3 back in June and is growing way too fast. She is also learning so much in school already. Right now we're learning how to write her name and I have been working my tail off. At one point I was working 2 jobs. I became a bartender at a place called Fuzzys Taco, also working at UPS. But I did manage to save a lot of money working 2 jobs. My sister and I still live together, but my goal is to eventually find a place for myself and Kambree. I believe I'm almost to that point. I love hearing from you guys and I sure wish we can all see y'all again sometime soon. We love and miss y'all! 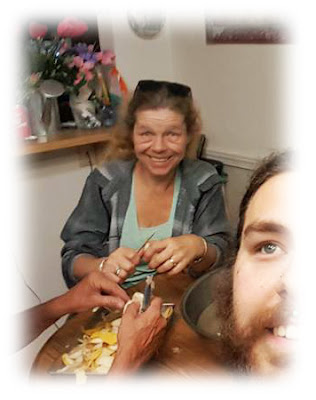 Birthday Wishes to Pam! This coming Sunday, October 30 is the birthday of Pam Engan Shepard, wife of my brother Russ Shepard and part of our family who lives in Anacortes, Washington. Pam is the mother of Linda and Steven Shepard. Happy birthday and best wishes to Pam as she celebrates yet another birthday!

This last picture was taken last month and shows Pam slicing apples in the kitchen of her mother-in-law Maida Shepard of Anacortes, Washington. Partially pictured with Pam is their son Steven Shepard.
- - -
Steve Shepard
Posted by Steve Shepard at 3:36 PM