Sticking with your family is what makes it a family.
~Mitch Albom

Happy Birthday to Aunt Vicki! Birthday wishes go out today to my aunt Vicki Gower Johnston of Chandler, Arizona, who turns 83 years old today. Vicki lives just a few minutes away from her daughter Paula Harrell Tuzzolino of Sun Lakes, Arizona. Her other children are David Harrell of Oak Harbor, Washington and Michael Harrell of Zionsville, Indiana (soon to be living in Tokyo, Japan). 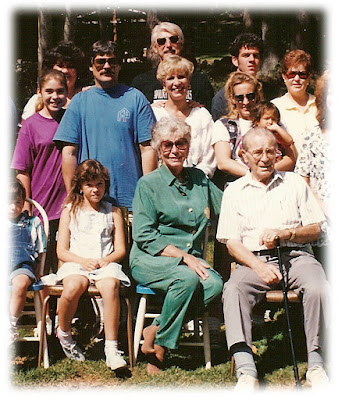 I talked with Vicki's daughter Paula recently, and she told me that her mom is doing pretty well, aside from the aches and pains that normally go along with being an octogenarian. Vicki still misses life in Oak Harbor, Washington where she lived for some 40 years in a beautiful home, high on a bluff overlooking the Puget Sound. Last fall she moved to the desert of Arizona to be near Paula.

Speaking of Washington, this first picture was taken in Anacortes, Washington in 1994 at a family reunion at the home of my parents Maida and Gene Shepard. Sitting pretty in the green outfit is my aunt Vicki Gower Johnston. Directly behind her is her daughter Paula. In the front on the right is my uncle Bill Russell (1908-1997), whose birthday is also today and who was featured in my blog post last week. 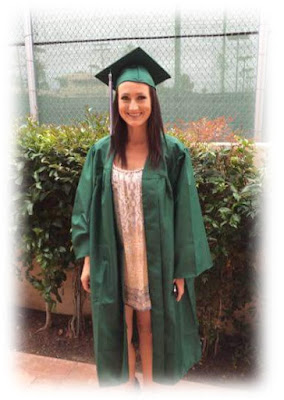 Happy Birthday Kori. Congratulations and best wishes to Korilyn Boyd, daughter of my cousin Darren Boyd. Kori who turns 19 today, lives in the North Park community of San Diego with her dad Darren Boyd. She graduated back in the spring of this year from Coronado High School and is attending Mesa College here in San Diego. Kori is the youngest child of my youngest cousin Darren Boyd, who is the youngest child of my youngest aunt Thelma Shepard Boyd of Blue Springs, Missouri.

This second picture shows Korilyn Boyd in a picture that was taken this past spring when Kori graduated from Coronado High School.

Connecting With Cousins. It is always fun to connect with people online who I have never met, but who are related to people who are ancestors of ours. In recent months I have connected with a second cousin named Lisa Allred Parks of Ft. Worth, Texas. She is a granddaughter of Sadie Shepard Pruett, the sister of my grandfather William Shepard. Lisa is the daughter of the late Twila Pruett Allred, who was a first cousin of my father Eugene Shepard. For several years I have been interested in connecting with this part of our extended family, but without success. So it was a real joy to get an email from Lisa who stumbled upon The Shepard's Crook not long ago and is now among our regular readers.

Earlier this year I also heard from another second cousin named Alice Shannon Traynor of Ft. Smith, Arkansas. Alice is a daughter of Marvin Shannon (1916-2004) who was a first cousin of my mom Maida Gower Shepard. Alice: "I was very excited to run across your blog. I stumbled across it when I googled Samuel Pickens Shannon." Samuel Pickens Shannon, of Mountain View, Arkansas, is the Great Grandfather of both Alice and me. It is gratifying to be in touch with both these extended family members and to learn more about their particular families and share with them about the ancestors we have in common.
- - -
Steve Shepard
Posted by Steve Shepard at 10:38 AM