Happy Leap Day from Northern California! Winter is still with us in our part of the world, but there are growing signs every day that spring is not far away.

Fascinating Family Fact: Did you know? "William" had been a common name in our family, going back at least 170 years, perhaps even farther. It has been given to at least one member of our family in every generation (except one) going back as far as we can trace the Shepard name (1835). Here is a list of the Williams:
Who will be next to name one of their children William? 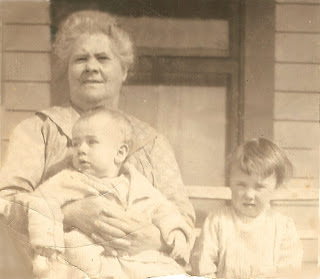 Family Faces. I am including two family pictures. The first is one of the oldest family pictures I have. It shows Elmer and Pauline Shepard and their grandmother Elvira Owens Shepard (1864-1931) wife of William Elmer Shepard.

I have no date for this picture, but Elmer, the boy in the picture, was born in 1918 and looks to be - what do you think? - maybe 2 years old? Elvira Owens Shepard, the woman in the picture, was "Grandad's" mother, whose family was from Alton, Illinois, where Grandad was born, which is just across the Mississippi River from Saint Louis, Mo.

The other is a picture taken last summer at our home in Dorrington California, of four cousins: Nathan William Shepard (of San Francisco), Patrick Shepard (of Bothell, Washington), and Steven and Linda Shepard (of Anacortes).

These 4 cousins represent the 20 great-grandchildren of Will and Bura Shepard, who range in age from 8 years old 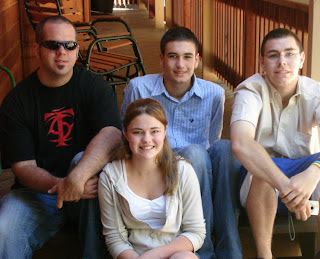 (Kaylan Shepard) to 42 (Eric Russell). Below is the complete list, with birth years and where they live now. Unfortunately, one from this list, Karl Wilk, died back in 1997. This is a very impressive generation of descendants of Will and Bura Shepard. (Please send me any corrections to this list.)

Remember: Shepard Family Reunion, Saturday, July 19, 2008, Anacortes, Washington. We are pleased that many of you have already told us you will be there and are making your plans to attend. Please let us know if you can make it so that we can plan for your presence. We want to include every family member and friend!
--
Steve

[P.S.... If you know of other family members or friends who would like to receive these emails, please ask them to send me an email at shepard@sierrawebworks.com -- or give me their email addresses -- and I will include them on the email list. If you have their physical address, please send that to me as well and I will make sure they receive an invitation to the reunion by US Mail. Also, please let me know if you would rather I use a different email address for you, or if you would prefer NOT to receive these messages.]
Posted by Steve Shepard at 10:22 AM