Hello from Lubbock, Texas, where Cindy and I are celebrating our 40th class reunion at Lubbock Christian University! We are enjoying the Texas hospitality of Jerry Clark and his wife Cathrina (see picture) and look forward to some time with long-time family friend Jane Brock and her husband Joe. We are also seeing school mates of years past -- all of whom, for some strange reason, have aged tremendously! ;-)

Fascinating Family Fact: Speaking of old... Did you know? Our oldest known Shepard ancestor, William Shepard (1835-1862), had a son, William Elmer Shepard (1862-1915), who was born in Wabash, Indiana during the Civil war, a few months before his father died. Because of his father's untimely death, the two of them probably never met.

William Elmer Shepard left home as a young man -- an old family tradition says he was estranged from his Indiana family for the rest of his life because of animosity with his step father. He settled in the St Louis area (Alton, Illinois) and married Elvira Owens. They had two children, a daughter, Sadie Shepard, and a son, William Shepard (1888-1976), who they named after his father AND grandfather. As a young man THIS William Shepard moved to the panhandle of Oklahoma (the land of opportunity at that time), married Bura Davis in 1915, and was the father of Pauline, Elmer, Eugene and Thelma. He was also a grandfather fondly remembered by a number of us (see picture).

I have no information on any of our Shepard ancestors before the William Shepard who was born in 1835 in Ohio. Do any of you have the interest and know-how to research our family history? We need one or more people who would be willing to give it some time and energy, in particular to discover our Shepard ancestors before 1835. And this is just the Shepard line. There is a whole other family tree belonging to Bura Davis (Shepard), that all us descendants can call ours. 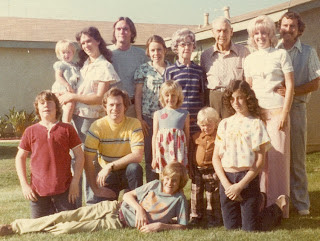 1975 was an eventful year for the Shepard family. This picture was taken at Gary and Jackie's home in Mira Mesa on the occasion of Maida and Eugene's 30th wedding anniversary. The following month William and Bura celebrated their 60th wedding anniversary. Two months before this picture was taken Rex and Margie Russell were married in a small family ceremony near Lake Jennings. Thanksgiving 1975 was a snowy event at Bill and Pauline Russell's cabin in Idylwild, Ca, remembered by many of us who were there. All of this came on the heels of the unfortunate deaths of Beverly Russell and Maida Shepard's father, Leroy Gower, within days of each other in December, 1974. 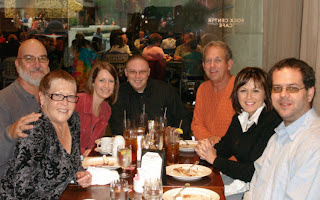 The other picture is Thanksgiving dinner 2007 and shows Cindy and me on the left, our son Nathan William Shepard on the right, with Jerry and Cathrina Clark next to Nathan. Next to me is Amanda (Clark) Farrell (Jerry's daughter) and her husband Chris, both Texans who now live in Hawthorne, New Jersey.

Family News. I received word this past week from Dane Shepard in Oklahoma City who says that his dad Elmer "has moved up near us into assisted living. His phone # is 405-376-0160 and his mailing address is ours: 8211 Shadow Lake Drive, Blanchard, OK 73010. We appreciate the family e-mail. Dad enjoys hearing about the family." (Elmer is the oldest living member of our Shepard family and will be 90 years old in May.)

As a follow up to my email a few weeks ago about family members who served in the military in wartime, Dane also writes, "My mother, Beryl (Swinney), was an ensign in the Navy Nurse Corp in WWII, stationed at Balboa Park, San Diego, from 1944-1945." ...Thanks so much, Dane, for sharing this information.