Hello from the snowy mountains of Northern California, on the Eve of Ground Hog day, which celebrates the mid-point of winter. I can see my shadow at the moment; we shall see about tomorrow.

Remember: Shepard Family Reunion, Saturday, July 19, 2008, Anacortes, Washington. You are invited! Barbara tells me that she and Maida are in the process of sending out an updated notice about the events by US Mail to all those for whom they have physical addresses. Do they have yours? If not send it to me, or to them, and we will make sure you receive one.

After my last message regarding Shepard family members who served in wartime, I received word from Thelma (Shepard) Boyd that her husband Terry was in the Navy back in the mid-50s and that Rex Russell was also in the service about the same time, although -- thankfully -- during peacetime.

Fascinating Family Fact: Did you know? Our oldest known Shepard ancestor, William Shepard, was born in Ohio in 1835, but as a young man his family moved to Wabash, Indiana. There he entered the Union Army and died on July 21, 1862, at 27 years old, from wounds suffered in the Civil War. 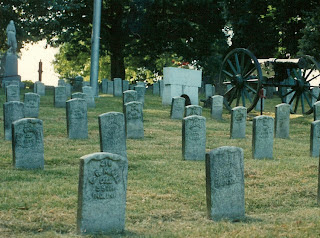 His burial site can be visited in the beautiful Civil War section of Oak Hill Cemetery in Evansville, Indiana.

I had a very interesting visit to his grave back in 1992 and found it easy to locate. I also visited his hometown of Wabash, Indiana and read that after being wounded in the war (by a cannon blast according to an old family story) he was sent to the hospital in Evansville where he contracted Typhoid fever which is what eventually took his life.

Family Faces. I am sending you two pictures. One is a picture of the grave of Civil War casualty William Shepard (1835-1862), our oldest known Shepard ancestor. His name is almost worn off the headstone (in front, on the right), which is now 146 years old.

The other picture is of Jeff and Kim (Boyd) Clark and two of Kim's 3 grandchildren, Ciara and Ashlyn, children of Jeremy and Desiree Ortiz, who live outside San Diego in El Cajon. Kim and her husband Jeff Clark live in Blue Springs, Missouri. Kim says she misses San Diego and gets back there quite often to visit her kids and grandkids. 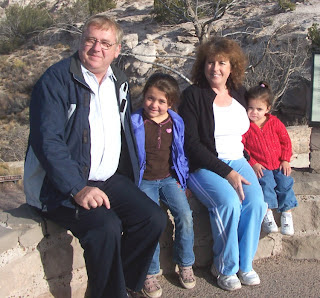