There are only two lasting bequests
we can give our children -
one is roots, and the other, wings.
- Hodding S. Carter

Today there are no less than three birthdays in our family. I don't think there is another day in the year with that many birthdays among the descendants of Will and Bura Shepard. 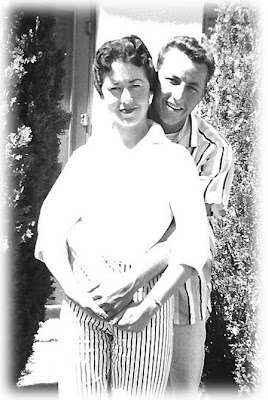 My aunt Thelma (Shepard) Boyd, daughter of Will and Bura Shepard, is celebrating a birthday today in Gallup, New Mexico, where she and Terry Boyd live. Which birthday she is having I am not at liberty to divulge (without dire consequences), as her note below will explain.

In [my sister] Pauline's last years, she used to tell me, "Don't get old." I would tell her that I only had one other choice!

Yes, I'm doing very well. I'm still working and loving my job. Terry is okay. Not great but medium. Our weather has been so crazy this year. A week ago Sunday it snowed all day long and got down to 20 degrees. Monday I went for my walk after work, and didn't even need a sweater. A week ago the wind and dirt blew so bad they closed I-40 on the Arizona side and traffic backed up bumper to bumper for 30 miles. It's beautiful now. (Just don't be telling my birth year or you're in trouble, Dude.)

Today is also the birthday of Thelma's granddaughter Courtney Boyd of Lakeside, California. Courtney is the oldest child of Darren and Vicki Boyd. Happy Birthday to Courtney and her grandmother Thelma. Terry and Thelma are pictured in the first photo. On the original it says "May, 1958, Tucson, Arizona". They were married in August of that year.

And finally this day is also the birthday of Christopher Shepard, son of Darrell and Mary Shepard of Kirkland, Washington. This second picture shows Christopher with his grandmother Maida and aunt Cindy Shepard. For those of you who may not know, the irony and the humor of the occasion was because those with cigarettes in their mouths were NOT the smokers. 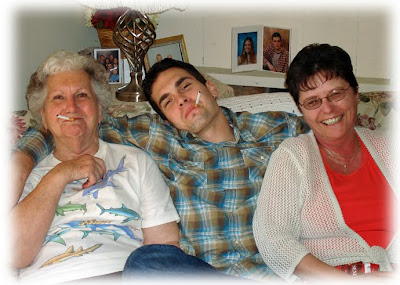 Mary gave me the following update on Chris:

Christopher is doing very well! He is attending Lake Washington Tech taking courses to become a Medical Assistant. He is doing very well in his classes! After he gets his certificate, he may pursue a career in psychology. He is still working full time at Remington Place in Lake City. His current 'passion' is nutrition and working out at the gym. He is leading a very healthy lifestyle. He has been dating a girl from Manchester, England for the past several months who is currently an au pair for a couple in nearby Woodinville. They spend a lot of time hiking, working out and staying very active.

Last week we were all deeply saddened by the sudden death of Rachel's puppy, Maddi. She was with Bryan at work when she was struck by a car and later died.  Maddi was so beautiful and sweet and was more like Rachel's child, than a pet.  Our entire family is in mourning. We intend to hold a memorial for her and spread her ashes in a couple of weeks. So, Chris is spending a lot of time this week comforting his sister.

Best wishes to all three birthday people today! And our best to Rachel and Bryan on the loss of their puppy.
- - -
Steve
Posted by Steve Shepard at 10:29 AM