In work,
do what you enjoy.
In family life,
be completely present.
~Lao Tzu

Greetings to all of you on this first day of May, 2010. Happy 99th Birthday TODAY to Mildred (Beck) Davis, the oldest living member of the family of Bura (Davis) Shepard. Mildred, who lives in Bartlesville, Oklahoma, was married to Jesse Davis, Bura's brother. 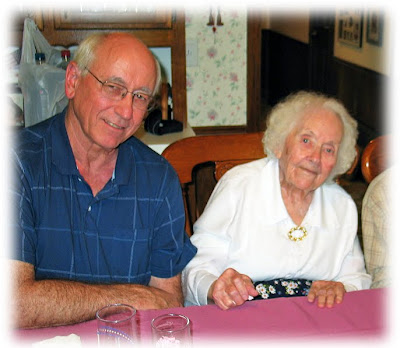 Mildred's son Bud Davis (see them both in the picture above) emailed me about their early birthday celebration:

We had a wonderful time together and brought away many good memories.  Just sitting in the living room with Mom and family nearby, even without saying anything.... the unspoken warmth of those you love.... able to communicate without words.... all of the stories as we remembered the good ole times... watching the little ones interact with Mom, and her smile at seeing them... all this and more made it a magical time.

All five of my sisters were there - Jessie, Charlotte, Nordeen, Becky and Kathy. We marvel that we are still blessed to be there with Mom on her 99th birthday. Many grandchildren and Ggrands were there to see her. Mom does not like a lot of attention or fanfare so we have to be careful about too big a production. Her most frequent question was: "Did you have enough to eat and do you have a place to sleep?" 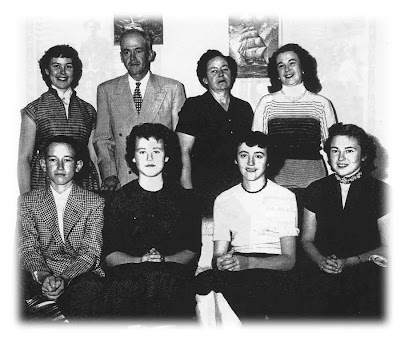 One conversation included trying to recall Jesse Davis' favorite color. Several in the room in unison said "red". Becky asked Mom if she remembered the red dress that dad bought for her at Nellie's Dress Shoppe in Boise City, Oklahoma where we grew up. After thinking a moment, Mom said with a gleam in her eye, "I remember I made him take it back!" Dad liked to surprise Mom with a gift and apparently it was not the right size... or maybe she just did not want him spending their hard earned money on her. Mom continues to be blessed with almost no pain. We are planning her next birthday already, the big 100.

The picture above shows Jesse and Mildred Davis and their 6 children in 1954. This picture is from their family history booklet compiled in 1993. The picture below, shows Jesse Davis and his sister Bura (Davis) Shepard in 1965. 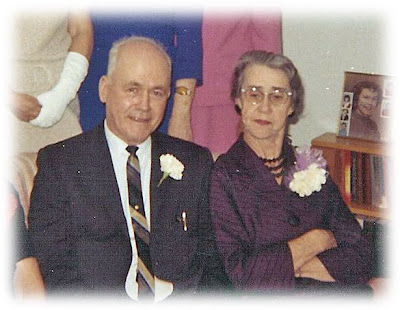 More 20th Century Brookses. Last week I mentioned that James Brooks Davis had two 20th century descendants who were given the name "Brooks". One of JBD's granddaughters, Becky Davis, informed me that I failed to mention two other 20th century Brookses. George Brooks (Bud) Davis has a son named Jeffrey Brooks Davis, and a grandson named Trey Brooks Davis. The name Brooks has been in our family for at least 300 years now, and it appears that it will continue for many more years to come.

Trivia Question Answered: Last week I asked a trivia question: How many GGGGGGGG (8 Greats) grandparents does each of us have in our family tree? The answer is pretty amazing. Each one of us has 1,024 GGGGGGGG grandparents in our family trees. (Good luck trying to find the names of all them!) What an incredible gene pool from which we are each a unique creation. Special commendation goes to Nathan Shepard of San Francisco for being the first to give the correct answer. Honorable mention goes to Steven Paul Shepard of Anacortes, Washington, for working the hardest to find the answer.
- - -
Steve