God gave us memories
that we might have roses
in December.
~J.M. Barrie

Greetings to all of you on this week of remembering some special loved ones. Tomorrow would have been the 71st birthday of Beverly Russell, had she not suffered a fatal brain aneurysm in 1974.

Bev's daughter Shannon Wilk lives in Atchison, Kansas with her young daughter Emma. The first picture shows Shannon in the arms of her mother Beverly in late 1973. Next to Bev is Shannon's grandmother Pauline (Shepard) Russell and her Ggrandmother Bura (Davis) Shepard. 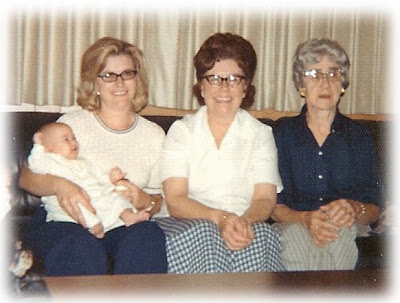 Shannon wrote me recently: Emma is doing great. Growing like a weed. She will be starting kindergarten this year. She is getting to be a computer nerd. Plays on it at school and at (papa) Frank's. Can't get her off the thing!

I remember my mother's birthday every year, though I usually remember it quietly to myself. I try to tell Emma everything I can about grandma, but having no memory of her is hard. Uncle Rex and Aunt Margie kept the picture of mom for me - the one above grandad's TV. It has now been above Emma's bed since the day she came home. Emma and I get a kick out of how much we both look like her.

Does anyone have any memories of my mother they would like to share with me and Emma? I would be most grateful. Did she like to dance? Emma and I dance all the time. We love music and Emma gets her little booty just-a-shaking! What was her favorite color? Favorite food? Did she like sports, etc.?

Sometimes it's hard to feel whole when half of me I do not know. But what I do have of my mom and what I do know, I keep a part of our lives. My father as well. Emma was only two when my dad passed in 2007. But she knows grandpa Phil, and points him out in all the pictures. We were out at the lake one day and a butterfly was following us - seriously - and Emma said that it was grandpa Phil, that he wanted to walk with us. The things children say... 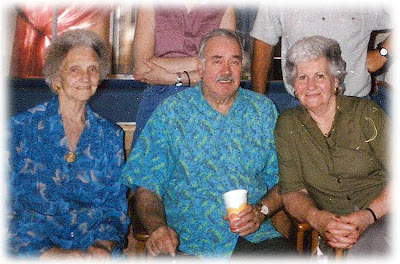 I encourage those who have memories of Bev to share them with Shannon and Emma. Please email me if you need her email address.

Other April Memories. This Wednesday would have been the 89th birthday of my father Eugene Shepard, who passed away in the summer of 2003. Wednesday also happens to be the birthday of my maternal grandmother Nola Gower who died in 2004 at 102. They are both gone but are still remembered fondly.

The picture above was taken at the home of Gary and Cindy Shepard in Ramona, California in 1997 and shows Nola Gower on the left, next to Eugene and Maida (Gower) Shepard. 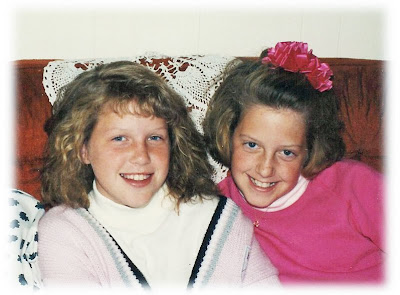 Birthday wishes to Susan Clark Cox and Amanda Clark Farrell, twin daughters of Jerry Clark and Jane Clark Brock. Susan and Amanda both turned 30 yesterday! Happy birthday to both of them!

The third picture, taken back in 1991, shows Susan and Amanda. These days Susan is in cahoots with dad Jerry in their business in Lubbock, Texas, and Amanda lives with husband Chris Farrell in Frisco -- not the one in Northern California, but the one in north Texas.

Safeguarding Motherhood. On Easter Sunday I posted a picture of Kelly and James Sauvage and their two boys (see the picture). I said that the boys were wearing Pittsburgh Steeler jerseys. Kelly insisted that I set the record straight: "The two boys and I are wearing Charger jerseys. James is the only one in a Steelers jersey. I mean come on... what kind of mother do you think I am?!"

Later this week I'll give the answer to last week's trivia question. (How many GGGGGGGG grandparents do each of us have?) It's not too late to make your guess.
- - -
Steve