From our ancestors come our names;
from our virtues come our honor.
~proverb


Today is the 115th anniversary of the birth of my paternal grandmother Bura Emerald Davis Shepard, who was born November 8, 1896 in Spencer, Indiana. It was 25 years ago this fall that she died, just a few weeks short of her 90th birthday. For those of us who knew her, her positive legacy and her wonderful memory remains. 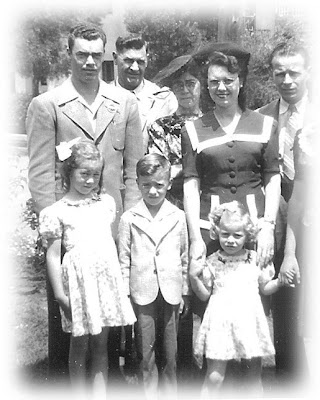 She was the oldest of the 7 children of James Brooks and Caroline Spear Davis. Her siblings were Lawrence, Myra, Jesse, Winona, Esther and Marjorie. In 1913 at the age of 16 her family migrated to Beaver County, Oklahoma, following the lead of several other Davises who had made the same move from Indiana. Beaver County, and in particular the South Flat Church of Christ, seemed to be to her liking. Because after just two years in Oklahoma she married William Shepard. He was a young man with hoosier roots himself whom she had met at the South Flat Church. Their life together lasted 61 years and resulted in 4 children: Pauline, Elmer, Eugene (my father), and Thelma.

Bura moved with her husband and family in 1928 to Two Buttes, Colorado and then in 1940 to San Diego, California where she and Will lived nearly all the rest of their days.

The first picture shows Bura in the middle surrounded by her family in a picture that was taken about 1943 in San Diego. On the back left are her son Elmer and her husband Will. On the right are her daughter Pauline and Pauline's husband Bill Russell. In front are Will and Bura's daughter Thelma, and Pauline and Bill's children Rex and Beverly Russell. The only member of Bura's immediate family not in this picture is her son Eugene Shepard, who was probably holding the camera. 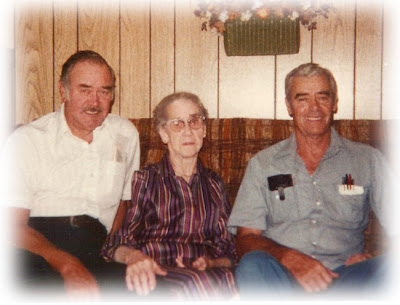 Will and Bura's descen- dants include 12 grand children, 21 Ggrand children, and 10 GGgrand children who today are scattered around the western half of the U.S. Bura is still remembered today for her small stature but strong character, her unwavering faith, and her love of family.

The second picture was taken in 1982, just a few years before her death, and shows Bura with son Eugene on the left and son Elmer on the right.

I still have the Bible I received as a boy which came with family tree pages in the middle. I can still remember when my grandmother Bura helped me fill in the blanks of those pages some 50 years ago. As we sat at the dining room table, I wrote down unfamiliar names of people long dead, like her parents James Brooks Davis and Caroline Spear and her grandmother Margaret Williams. And I heard for the first time about far off places like Spencer, Indiana, as my journey into family history began.

Not everything about our ancestors lives within us, but I am convinced that some of the best of Bura Davis is reflected in my life. I am sure many of you can say the same.
- - -
Steve
Posted by Steve Shepard at 3:02 PM