Remember, remember always,
that all of us, and you and I especially,
are descended from immigrants and revolutionists.
~Franklin D. Roosevelt


Greetings to all of you from Alameda, California where Cindy and I are visiting with our son Nathan and his family. We have had a busy but enjoyable few days splitting our Thanksgiving weekend between Northern and Southern California. 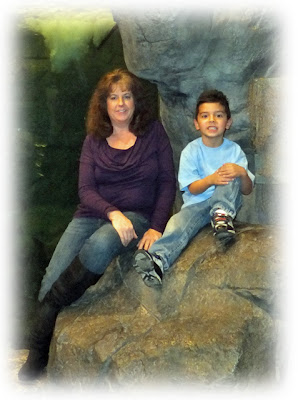 Happy Birthday Kim and Damian. Today is the birthday of Kim Boyd Clark, and her grandson Damian Ortiz. The first photo shows Kim and Damian in a picture that was taken just a week ago in Missouri.

Kim: I can't believe the year has almost gone. It seems to go by faster and faster. A lot of changes this year and the best one is getting to see my grand kids every day and spoiling them.

We will be having another grandchild in June. We have a full house plus a new litter of puppies to keep all of us busy. I think everyone but me is looking forward to the snow and can't wait for it to arrive.

Damian is so ready to start kindergarten in August. He's full of energy, rarely gets tired and loves to dress up like Captain America, Spider-man or others. He has quite an imagination. We will have our birthday dinner at Red Lobster. Damian loves shrimp and wants to try lobster. Happy Thanksgiving to you and your family! I wish we could all be together again. 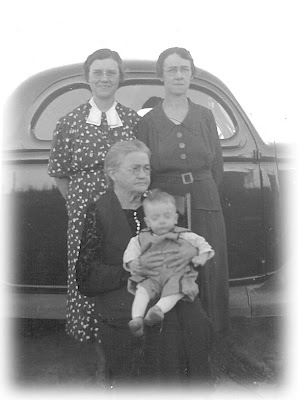 Caroline Spear Davis. Today is also the birthday of Kim's Ggrandmother Callie Spear Davis, who was born on this day in 1865. Born in Spencer, Indiana, she married James Brooks Davis, with whom she had 7 children, all born in Indiana. The entire family moved to Beaver County, Oklahoma in 1913.


The second picture I am including today is one that became available to me just recently. It is one of the few pictures I have of Callie Davis and was taken later in her life when she lived in Beaver County, Oklahoma. The other family members in this picture were living in Two Buttes, Colorado, where they had moved from Oklahoma in 1928.

In this picture are four generations of our family:
Rex was born in Two Buttes in the spring of 1936, so this picture must have been taken later that year or perhaps in early 1937. Rex passed away earlier this year at 75 in Red Rock, Nevada which is where his son Eric and wife Ruthie still live.
- - -

Posted by Steve Shepard at 8:17 AM