Every person is an omnibus
in which their ancestors ride.
~Oliver Wendell Holmes
Hello Family and Friends,
Greetings to all of you from San Diego, as Thanksgiving passes into memory and the hectic push toward Christmas begins. 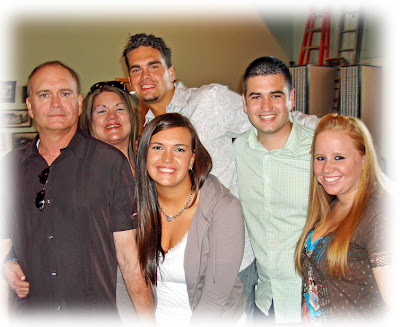 Happy Birthday today to Patrick Shepard of Kirkland, Wa. Pat is the last of the four members of our particular clan who were born in 1990 and who therefore turn 21 this year. The others are Steven Paul Shepard, Courtney Boyd and Lyndsey Aquiningoc.
Pat lives in Kirkland with his fiance Nicole Haw, not far from his parents Darrell and Mary Shepard. He and Nicole plan to be married and will be traveling to Cancun, Mexico with their immediate family in March to celebrate. Congratulations and best wishes to both of them! 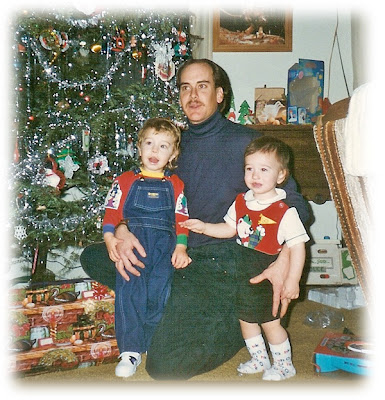 The first picture (above) shows Patrick on the right with Nicole next to him. On the left are his mom and dad Darrell and Mary. His siblings Christopher and Rachel are in the middle. This picture was taken this last summer at the Shepard family reunion in Anacortes, Washington.
To get us in the Christmas spirit I am including a picture that was taken 19 Christmases ago, also in Anacortes, Washington. It shows Patrick on the right at 2 years old, with his uncle Russ Shepard and his cousin Steven Paul Shepard.
Oklahoma Update. I received word from my cousin Dane Shepard in Oklahoma that his father Elmer Shepard has moved. He had been living in an assisted living facility in Mustang, Oklahoma but just last week was moved to the Norman Veterans Center, Norman, Oklahoma. 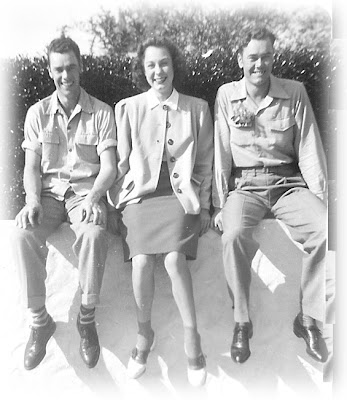 Dane said that they "had a good hour long interview with the resident doctor who has had a lot of experience in managing Dad's kind of problems. I was impressed with his understanding of the medications being taken and his recommend- ations. I am confident Dad will be able to receive help here that he was unable to get in an assisted living setting. They are able to give medical treatment and have a nursing care unit as well. It is a very nice facility and I'm so thankful he is not far away."
The third picture I am including was taken about 1941 and shows Elmer Shepard on the left in his early 20s, and Eugene Shepard on the right who was just about 20 years old (younger than his grandson Patrick in the first picture above!). Their sister (my aunt) Thelma Shepard Boyd wrote me recently to say that this picture was taken in San Diego and that the girl looks familiar and was probably just a friend of theirs.
- - -
Steve
Posted by Steve Shepard at 2:55 PM