If your descent is from
heroic sires,
show in your life
a remnant of their fires.
-Nicholas Boileau

A few weeks ago when Cindy and I were in Washington, we discovered some unexpected treasures. A couple of old family photo albums had turned up in the bottom drawer of an old cabinet, beneath some material that had not been moved in several years. The albums were nearly 70 years old, and contained pictures from the late 1930s and early 1940s, including photos of my parents Maida and Eugene before they were married, some before they had even met each other. 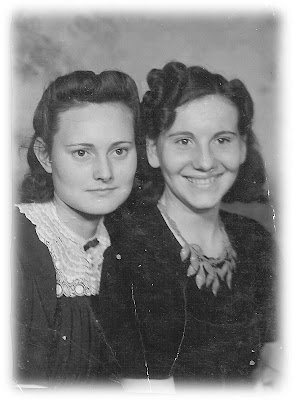 The first picture I am including today from those old albums shows Maida Gower (on the right) with my aunt Starlene Bass Gower, wife of Maida's brother Hendrix. This picture was taken around 1940, when Maida's Gower family still lived in Oklahoma.

Most of the pictures in the albums that were found are black and white, as you might expect. Color photography would not be popular until the 1960s. And cameras were not nearly as sophisticated as they became in later years, with automatic focus and light adjustment. Some of the pictures however, like this first one, are excellent quality.

The late 1930s and early 1940s was a very unique time. There may never have been a time in the known history of our families when there was so much turmoil in our world and transition in our families. World War II was taking place, with all of the uncertainly it brought to our nation and to our families. 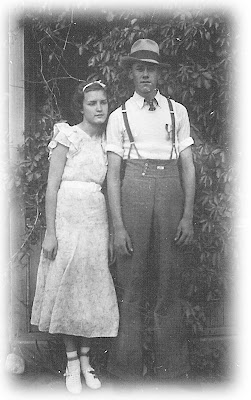 During these years my father's Shepard family and my mother's Gower family moved to California. The second picture, taken in Two Buttes, Colorado in the late 1930s, shows school boy Eugene Shepard with family friend (and one time girl friend?) Violet Gibbs (who later married Rod Ramirez). The Gibbs family had moved to San Diego about 1939 and wrote back to Will and Bura in Colorado encouraging them to move out west and run a boarding home just as they were doing. So many new people, military and civilian, were moving to San Diego that housing was scarce, and boarding homes were doing a great business. So in 1940 Will and Bura packed up their family, moved to San Diego and ran a boarding home for several years as they got settled in California.

In moving to San Diego, the Gowers and Shepards left behind small, depressed farming communities in Colorado and Oklahoma, as they embraced the bustling energetic city life in San Diego. They seemed to make the transition quite well, but there must have been some culture shock for Will and Bura Davis Shepard, and for Leroy and Nola Shannon Gower. The future was good for both families with employment opportunities resulting in a better quality of life. 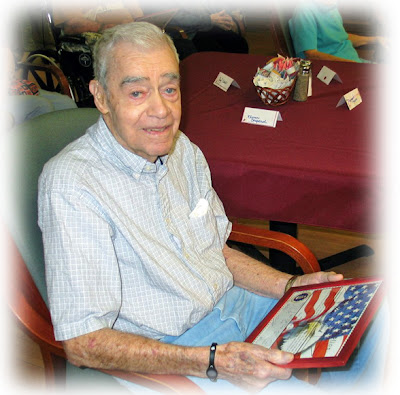 Besides all this, it was a time for Eugene, Elmer, Maida and others to choose life partners, decisions that would alter their lives forever. Within a few years of moving to California, all 5 single children of both families got married and began families of their own.

Speaking of family treasures, I received an update recently from my cousin Dane regarding his father Elmer Shepard, who will be 94 next spring. He lives in Arbor House Assisted Living, in Mustang, Oklahoma not far from Dane and his family in Newcastle, Oklahoma. Elmer continues to have health concerns but is in a safe, comfortable place with good care. He was honored recently on Veteran's Day in a ceremony that was appreciated by the residents and their families.

Thanks for the treasure that Elmer is to our family, and for all the Veteran's among us.
- - -
Steve

Posted by Steve Shepard at 8:02 PM