Praising what is lost
makes the remembrance dear.
~William Shakespeare

I was saddened just 2 days ago when my cousin Dane Shepard let me know that his father Elmer Shepard had died that afternoon. The family had received word from his doctor just the day before that he was suffering from congestive heart failure and that he would not last much longer. 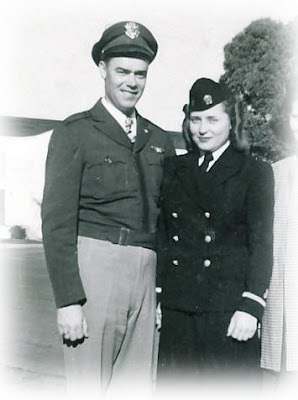 At 93 years old, Elmer was the senior member of our Shepard clan, and had been ever since his older sister Pauline Shepard Russell passed away 12 years ago here in San Diego. For the last few years Elmer had lived near his son Dane, most recently in a Veteran's facility in Norman, Oklahoma.

Elmer began his life in the panhandle of Oklahoma, in Beaver County, in the spring of 1918, as the second child of William and Bura Davis Shepard. When he was 10 years old the family moved to the tiny hamlet of Two Buttes, Colorado, which is where he graduated from High School. In 1940 the entire family moved to San Diego, California, just before the U.S. entered World War II. Elmer served in that war as an Air Force pilot.

While in the service he met Beryl Swinney at San Diego's Naval Hospital (see first picture). They were married in 1946 and settled in San Diego where they were part of the larger San Diego Shepard clan. That clan included William and Bura Shepard, all four of their children (including Elmer) and their spouses, and their brood of 12 grandchildren, which included Dane and Joan, Elmer and Beryl's two children. 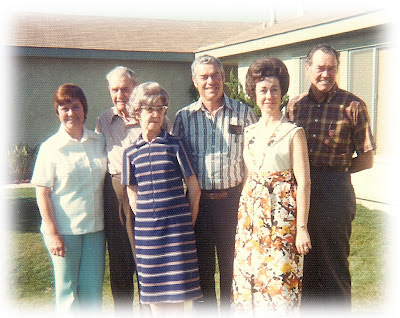 I was also among that brood of 12 who were born and raised in San Diego in the 1940's, 50's and 60's. It was during that time that I had lots of contact with my uncle Elmer, certainly more than in the years since then. I remember him as a serious man, who shared his mother's deep devotion to the Church, a man who enjoyed family gatherings, who was willing to take us boys to a Padres game, and who thought very highly of family. (see second picture from 1975, of Elmer -- in the middle -- with his parents and siblings.)

It was in the 1940's, 50's and 60's, on Christmas Eve or July 4th or Thanksgiving, that the whole family would gather occasionally: uncles and aunts with their partners, grandparents, and lots of cousins, with a few friends thrown in for good measure. Those were important times when the whole family bonded over lots of food, board games and hand cranked home made ice cream. My uncle Elmer was very much a part of those gatherings. As a matter of fact, often it was at his and Beryl's home on Osage Trail in the San Diego suburb of Winter Gardens that we gathered. 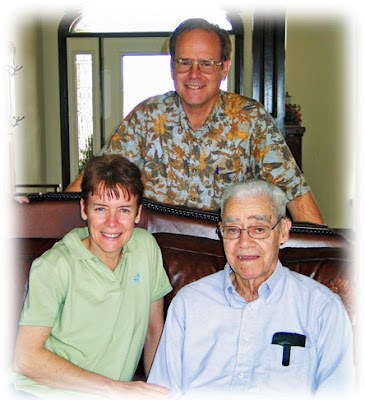 When I saw my uncle Elmer at the Oklahoma family reunion 3 years ago, it may have been the first time I had seen him since the late 1970s when he and Beryl moved from San Diego and settled in Henderson, Texas. Beryl died 18 years ago, when they lived in Henderson, and is buried in a county cemetery nearby. Appropriately enough, Elmer will join her in that same cemetery when he is laid to rest this weekend. The funeral will be this Saturday at the Crim Funeral Home in Henderson, Texas.

Our hearts go out to Elmer's immediately family, his son Dane (in the 3rd picture, from 2008) who lives in New Castle, Oklahoma with his wife Cindy and their children Nathan and Kaylan, and Elmer's daughter Joan Shepard (also in the 3rd picture) who lives in Dixon, California, and her daughter Havilah Wardle in West Valley City, Utah.
- - -
Steve
Posted by Steve Shepard at 10:12 AM