Parents can only give good advice
or put their children on the right paths,
but the final forming of a person's character
lies in their own hands.
~Anne Frank
Hello Family and Friends,

Greetings to all of you from Oak Harbor, Washington, where Cindy and I are enjoying family here and in nearby Anacortes, Washington.

This month we remember the birthday of my grandmother Nola Shannon Gower who died here in Western Washington back in 2004 at 102 years old. This year marks the 70th anniversary of the move she and her husband Leroy Gower made to San Diego in 1942 -- a move that was as challenging and difficult as it was significant. (See first picture of Leroy and Nola Gower in 1972.) 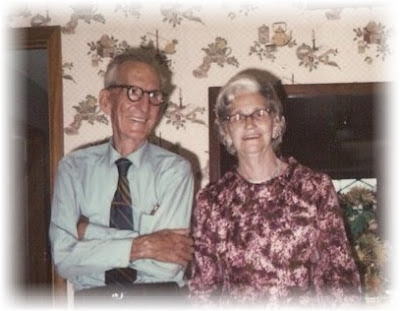 Nola and Leroy were originally from Stone County, Arkansas, but had lived in Okemah, Oklahoma for 16 years before they migrated to San Diego as a young family. When they arrived in California, she was 39; he was 42. It was the last major move they would ever make together.

As with many other migrant families who moved westward, they made the move in stages. First Leroy and their son Hendrix and his wife Starlene came to San Diego to get settled and find jobs before sending for the others. It did not take long for Nola and her 2 daughters back in Oklahoma to get word that the men were employed by the Railway Express and they should join them in California. 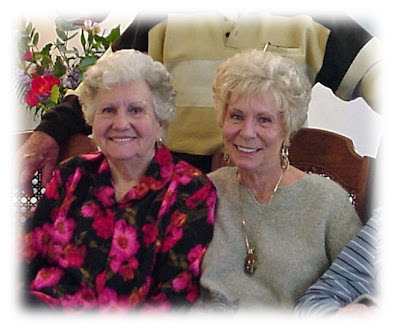 My mother -- a senior in High School at the time -- recalls that it was in January of 1942 that she, her mother Nola and her 9 year old sister Melva (Vicki) made the arduous, 1,400 mile bus ride from Okemah to join the others in San Diego. (See second picture from 2002 of my mother Maida and her sister Vicki.) While Okemah was a small struggling town where Leroy could not find steady work, San Diego was a bustling, booming military city, full of war time vitality where jobs were plentiful.

With the exception of Nola's last few years, she and Leroy spent the rest of their lives in San Diego. It was a good family decision they made to move in 1942. They found jobs, made a decent living, enjoyed the mild climate, and bought a home on Lynne Street in East San Diego that was the hub of their family's life for 50 years.

Their 12 grandchildren were raised in San Diego, and most of them were born there. Their family that had numbered just 6 when they arrived in 1942, blossomed into a clan of 33 members by the time Leroy died in the mid 1970s. Over the last 35 years, however, some of them have died while others have moved away to Western Washington, Tennessee, Arizona or elsewhere in California.

A few of us descendants of Leroy and Nola still live in the San Diego area -- me, Shaun Gower, and Autumn and Amber Gower. It is, of course, a very different place now than it was all those years ago, but the Gower presence is still felt, and the memory of that wonderful couple remains.
--
Steve
Posted by Steve Shepard at 9:00 PM