Home is the place where,
when you have to go there,
they have to take you in.
~Robert Frost

Greetings to all of you from our home in historic San Diego, where we have returned after a few weeks away visiting family. 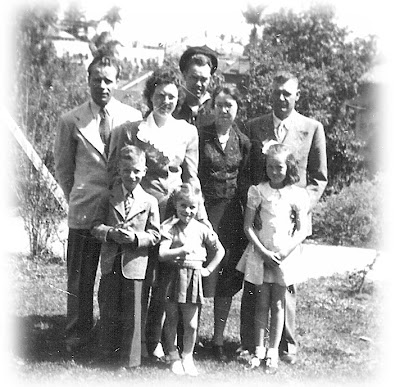 Had my father Eugene Shepard not died 9 years ago in Anacortes, Wash., today would be his 91st birthday. The third child of Will and Bura Davis Shepard, he was born in Beaver County, Oklahoma in 1921. In 1928 his family moved to the tiny town of Two Buttes, Colorado where he finished his formal education and graduated from High School. The following year (1940) his family made a major move to San Diego, following the lead of some of their friends and Davis family members who had already relocated in California.

The first picture from about 1943 shows the entire clan who moved to San Diego, with the exception of Elmer (who may have been behind the camera). On the back row are Bill and Pauline Shepard Russell, Eugene, Bura, and William Shepard; in front are Rex and Beverly Russell and Thelma Shepard.

While serving in the Navy in 1943, Eugene met his wife-to-be Maida Gower whose family had also recently moved to California. Together they raised their 6 children in San Diego before he retired from the Naval Supply Depot in 1978 and moved to Anacortes, Washington to help with the little church of Christ in that town. For the last 25 years of his life he and Maida lived in Anacortes. His first 19 years were spent in Oklahoma/Colorado, the next 38 years in San Diego, and the final 25 in Washington. 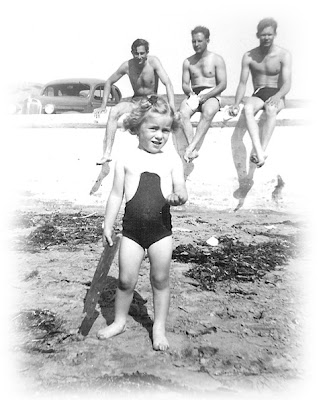 Among his family members who moved to San Diego from Two Buttes, Colorado in 1940 was his niece Beverly Russell. Born in 1939, she was still in diapers when the family landed in California. Had she not died unexpectedly in 1974, yesterday would have been her 73rd birthday.

Bev, the daughter of Bill and Pauline Shepard Russell, and the wife of Phil Wilk, has two descendants living today: her daughter Shannon Wilk and her granddaughter Emma Wilk, of Atchison, Kansas. Her nephew Eric Russell lives in Red Rock, Nevada. The second picture from about 1944 shows Bev on the beach in San Diego, with some unknown admirers of this bathing beauty in the background.

My cousin Beverly and my dad Eugene are people who will always be in my personal "Hall-of-fame". They were both wonderful people to know, and lived quality lives that I will fondly remember all my life. Beverly, a cousin 8 years my senior, was someone I looked up to. She shared her mother's love of life and positive attitude. She loved and supported all her young cousins and enjoyed being the oldest female cousin of the entire brood. 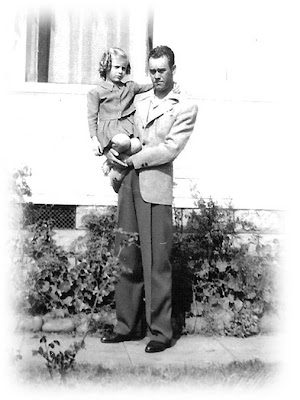 My dad was a extraordinary churchman, and a humble man. Although he lived the biggest portion of his life in the city of San Diego, he carried his small town Oklahoma values and roots with him all his life. He never "got after me" -- so to speak -- for "leaving the fold" of the church of Christ and becoming a Christian Church minister, but was always pleased with whatever I made of myself in life.

The third picture shows Gene Shepard with his niece Beverly Russell in a picture taken in San Diego about 1944 when he was about 23 and Bev was about 5. All three pictures in this post are from the photo collection given to me by Bev's nephew Eric Russell and his wife Ruthie. Thanks so much to them!

Gene and his mother Bura Davis Shepard were both loyal church of Christ members to their dying day. Their commitment to the church of Christ was extraordinary. Yet I think they both entertained a secret notion that family was a place of love and acceptance that went beyond the teachings of any particular church. And that is to their great credit.

This emphasis on extraordinary love and acceptance within families is spoken to in the lightheartedly cynical quote by Robert Frost at the top of this post, which is from his poem "The Death of the Hired Man".

Speaking of "Hall of famers", today would also be the birthday of my grandmother Nola Shannon Gower, a woman dearly loved and admired by all her descendants. I referred to her at length, and included a picture of her, in my blog post a week ago, so I won't say much about her today, other than she shared April 28 as her birthday, with my dad, her son-in-law, Eugene Shepard.
--
Steve
Posted by Steve Shepard at 11:23 AM