Family is what grounds you.
~Angelina Jolie

On this week of July 4, several family celebrations are in order.

Happy Birthday today to Becky Clark Cave who lives in Weatherford, Texas with her husband Matthew and their 3 children. She is the oldest daughter of Jerry Clark and Jane Brock of Lubbock, Texas. 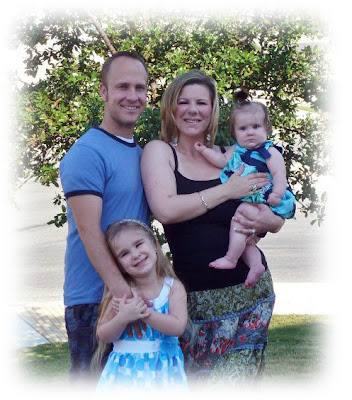 Happy Anniversary. Today we also congratulate Sean and Heather Robson Cotton of San Antonio, Texas, who celebrate 12 years of marriage. Heather is a Granddaughter of my aunt Vicki Johnston and the daughter of my cousin Paula Tuzzolino of Oak Harbor, Washington. Heather is also one of the Ggrandchildren of Leroy and Nola Gower.

The first picture shows Heather with her husband Sean and their daughters Victoria and Alexandria.

A 147th Birthday. Today, July 1, was also the birthday of my Ggrandmother Elvira Owens Shepard. Elvira is our connection to our Owens roots of 19th century Madison County, Illinois. Her Owens kinfolk consisted of a strong family with healthy roots, that I have written about in this blog a number of times. Elvira's parents Payton and Mary Wheeler Owens, were early Illinois land owners who began the establishment of the Owens family in Madison County, a presence that continues there to this day. Elvira's Ggrandparents Edmund and Sarah Rives Owens were both originally from Virginia and were children on the very first July 4th celebration in 1776.

Coming from a strong family, it was ironic that in the early 1880s, as a young woman, Elvira met and fell in love with a vagabond from Indiana named William Elmer Shepard, who had no connection to his family. His father had died in the Civil War when he was an infant, and by the time he became a teenager, he was at such odds with his step family that he left his Indiana home and never looked back. For whatever reason he landed in Illinois, where he met Elvira. In 1886 they married and over the course of the next few years had two children, Sadie and William. (I would eventually become a grandchild of William.) 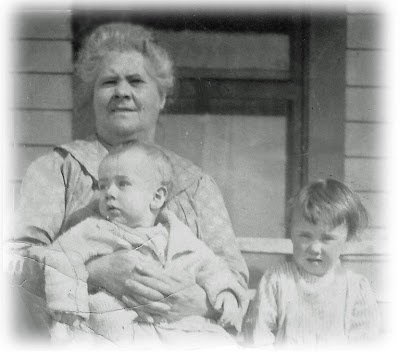 Elvira was born July 1, 1865, just 3 days before the first July 4th celebration after the Civil War. It was a time of new beginnings, following one of the darkest times in our nation's history. But it was an incredibly formative time for our country as well. Some would say July 4, 1865 represented an even more defining moment for our nation than July 4, 1776. The Civil War was a devastating experience, but it brought our nation to a much more complete and mature understanding of who we are. Our identity shifted dramatically from being a group of independent states to being a united people. Before 1865 people always said "the United States ARE..." (plural verb, emphasizing the states). After 1865, when people spoke of our county they said, "the United States IS..." (singular verb, emphasizing the union).

Elvira, her family of origin as well as her own family, were all a part of this "new" nation, after the Civil War, a nation that was continuing to evolve and become something that we still celebrate today. The second picture shows Elvira and two of her grandchildren, Elmer and Pauline Shepard. This picture was taken about 1919 in Beaver County, OK., where Elvira and her family migrated in the early 1900s and where she lived the rest of her life.
- - -
Steve

Posted by Steve Shepard at 9:26 AM