It is time for those
who talk about family values
to start valuing families.
~John Kerry

Greetings to all of you from Alameda, California where Cindy and I find ourselves, while the vigil continues and the anticipation builds. 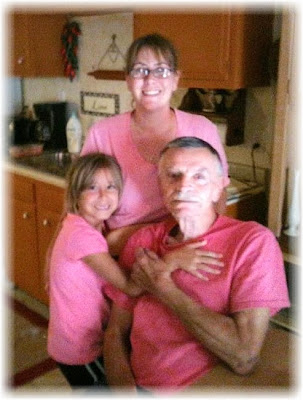 Happy Birthday Shannon! Tomorrow is the birthday of thirty-something Shannon Wilk, daughter of the late Phil Wilk and Beverly Russell Wilk. Shannon is one of the Ggrandchildren of William and Bura Davis Shepard.

Shannon: We thought it was funny that we all had pink on the day of that picture. You just had to remember my birthday, didn't you!! I was trying to forget it!! Time is flying by and I can't catch up!!

Emma lost her other top front tooth. She will be in second grade this year. We are good and just enjoying everyday as best we can. The weather here is so HOT!! 106 today. The grass is brown, the crops are all dried up and it doesn't look like the end is near. Thank goodness our wonderful neighbors let us come over and swim all the time. I hope all is well with you. As always, it's nice to hear from you. Take care.

The first picture shows Shannon with her daughter Emma, and Frank Bockach. Frank was the life partner of Shannon's father Phil Wilk for 28 years until Phil died back in 2007. Shannon, Emma and Frank live in Atchison, Kansas.

A Family Hero. In my last post I mentioned that at this time of the year our family remembers several persons whose deaths were especially difficult because they died so young.

Yesterday as we sat in church, I said a prayer for the memory of my GGgrandfather, William Shepard (1835-1862). It was exactly 150 years ago yesterday that William, at 26 years old, died in Evansville, Indiana in the service of the Union Army during the Civil War. (See second picture of his grave, with the ghostly image of a white dove floating across the grass over the grave where he lay. I honestly did not notice anything unusual when I took this picture last summer.) 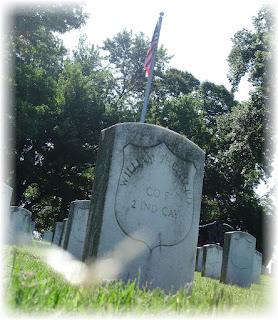 When he died he left a 21 year old wife named Mary Sprague Shepard and a 5 month old baby named William Elmer Shepard. We remember and honor the soldier William for his willingness to serve and for the sacrifice of his life that was honorably made for his country.


He was one of over half a million Americans who died in the Civil War, but we owe it to him to remember his life nonetheless. Indeed, his life and sacrifice are given greater honor as he is remembered by us who are his descendants. He is only one of several members in our family tree who served during that conflict, yet William still stands out as one more family member who died way too young.

We don't know the full extent of the hardships faced by his young widow Mary Shepard and their infant son, but life must have been extremely difficult for them. There is no record that she ever received a widow's pension, but she did remarry a few years later, and had three more children by her second husband, and lived into the 20th century to the ripe old age of 79. Unfortunately the difficulty of being a widow with a child took its toll and she was estranged from her only Shepard son, William Elmer, for his entire adult life.

We look back with humility and gratitude at ancestors like William and Mary and their son William Elmer who made the most of their lives under trying circumstances. And we hope that something of their fortitude and resilience has been passed on to us who share their DNA.
- - -
Steve

Posted by Steve Shepard at 9:09 AM