The way we talk to our children
becomes their inner voice.
~Peggy O'Mara

Greetings to all of you from San Diego, California where Cindy and I are finally home after several weeks in Northern California where we helped usher into this world the newest member of our family, William Quincy Shepard, who is now a week old. 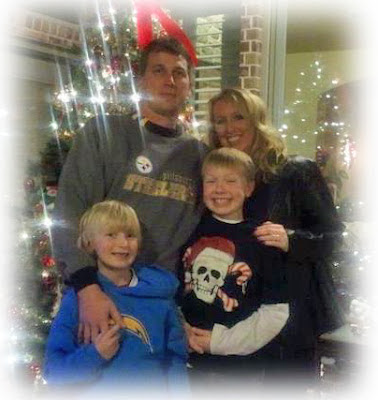 Happy Anniversary to James and Kelly Shepard Sauvage today, August 5. Kelly, who was born in San Diego, is the third child of my brother Gary Shepard of Oak Harbor, Washington, and Jackie Perry of Weatherford, Texas.

As I sat in church this morning, I was remembering back 12 years ago when, on this very day and in this very place, James Sauvage and Kelly Shepard were married. Now after a move half way across the country, and the birth of two wonderful sons, they are happily living in Weatherford, Texas and celebrating today a dozen years of married life.

The first picture shows James and Kelly with their sons Kyle and Nate.

Kelly: Hi Uncle Steve! Yes, Sunday is 12 years since James and I got married. Time goes by so fast! We are doing really good... trying not to melt away in this Texas heat! We don't have any big plans; we'll just go out to dinner. James always stays busy with work, coaching and refereeing football, which is about to get started again. I stay busy working, and taking care of two active boys. We sure have a blast together. I was so honored that you were the one that married us in that beautiful church 12 years ago!! Thank you! 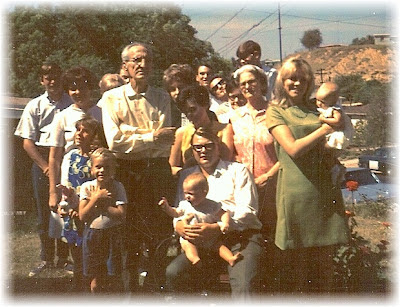 Setting The Record Straight. I need to make a correction to something I said a couple of weeks ago regarding this part of our family. I realized my mistake when I looked closely at the picture I included in my post last week. I am including the picture again this week, which shows Leroy and Nola Shannon Gower, and a number of their family members. It is a picture that was taken in 1968 in front of the Gower home on Lynne Street in San Diego.

The two youngest family members in this picture are Kerri Shepard (on the right, being held by her aunt Linda Shepard) and Shaun Gower (in the middle front, in his father Hershell's lap). I said a couple of weeks ago that Kerri was the first Ggrandchild of Leroy and Nola Gower. But Shaun is the older of the two babies and is therefore the first Gower Ggrandchild, though only by a few months.

Shaun was born in England November 8, 1967, while Kerri was born in Michigan March 3, 1968. This picture then, which looks to have been taken in the spring of 1968, reflects a family gathering that was celebrating these two Gower Ggrandchildren whose parents had recently returned to Southern California from far away.
- - -
Steve Shepard
Posted by Steve Shepard at 6:28 PM