If you pluck a special moment from life and frame it,
are you defying death, decay and the passage of time,
or are you submitting to it?
-Orhan Pamuk

Linda is the one referred to at the end of the poem by her father Russ Shepard, which I included in this blog a couple of weeks ago. That poem remembered Russ' sister Linda Shepard who died in 1971. The last few lines of that poem read, "It's still hard to believe that you are gone. But I gave life to someone to carry your name on."  Birthday girl Linda is named after her late aunt Linda Shepard (1950-71) of San Diego. 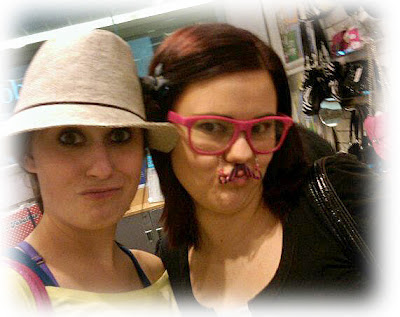 The first picture, taken earlier this year, shows Linda (in the pink glasses and mustache) with her good friend Brittany.

Linda: I am doing good. I just passed four months on my job at Fidalgo Care Center and Rosario Assisted Living here in Anacortes. I am also going to school full time. I am starting my prerequisites for my RN and will graduate in March 2016 if all goes as planned. I am not really planning on doing much for my birthday. I think my mom is trying to plan a dinner or something. Turning 19 is just another birthday in a way. I am just ready to hit the pavement of life running with work and school. I am staying pretty busy with everything but I am excited for the end results when the work pays off.

Remembering 1957. The second picture I am including today is an old family photo from 1957. It seems to me there is something extraordinary about pictures from the 1950s. Probably because that was the decade when I was a youngster and therefore the time of my oldest family memories. In looking at my photo collection I see that it is also the last decade when nearly all photos were black and white.

I had never seen this second picture until my cousin Michael Harrell posted it on Facebook a few weeks ago. It shows the family of my aunt Vicki Gower Harrell and her husband at the time Carl Harrell. Michael (the little boy in the middle front, who lives today in Mountain View, California) told me the following about this picture. 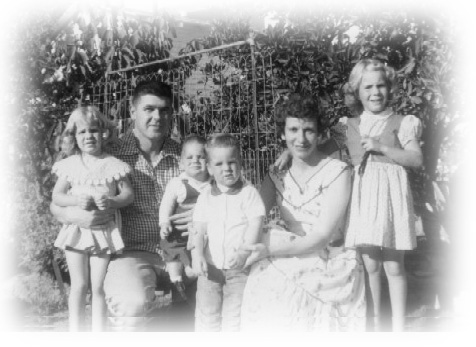 We had just returned from Tokyo (where I was born) and moved to Fort Ord in Monterey. I believe that picture was taken in front of our home in base housing. A couple of years before my dad died he and I became reacquainted and actually got to be pretty good friends. When he passed away I went to his home in West Palm Beach, FL to put his affairs in order and makes sure his wife was taken care of. I was going through his things when I found that picture. It was like I found a goldmine. I will forever be grateful we got to connect again before his passing. By the way, in that family picture, going from left to right are Gloria, Dad, David, Me, Mom, and Paula.

The children in this picture are 4 of the 12 grandchildren of Leroy and Nola Gower. These four, along with their 8 cousins (myself included), spent most of their growing up years in San Diego. Thanks so much to Michael for sharing this family picture, this special moment plucked from life.

The question in the quote at the top of this post, posed by the novelist Orhan Pamuk in his book Istanbul, is a good question for those of us who love old family pictures. When you admire them, enjoy them, frame them, "are you defying death, decay and the passage of time, or are you submitting to it?"