You live as long as you are remembered.
~Russian proverb

Greetings to all of you from our home in San Diego where Cindy and I have returned after visiting family in Northern California and Western Washington. 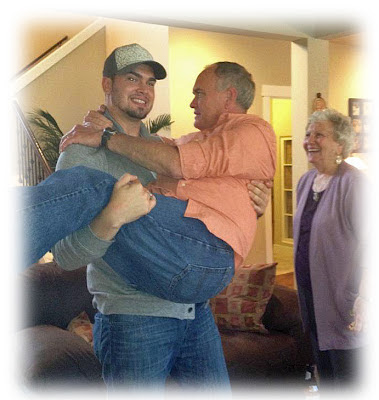 Patrick and Nicole's House Warming. Among the people we visited were nephew Patrick and his wife Nicole Haw Shepard in their wonderful new home in Bothell, Washington. Congratu- lations to Patrick and Nicole on the purchase of their new home!

They had a house warming party last Saturday to celebrate their home with family and friends. The first picture, taken by Patrick's sister Rachel Shepard, was taken at the housewarming and shows Patrick's brother Christopher Shepard, holding Patrick's father Darrell Shepard, and being encouraged in this silliness by Patrick's grandmother Maida Shepard. It was obviously a fun time!

Kim's Surgery. I received an email from my cousin Kim Boyd Clark in Missouri, with the sobering news that she has recently developed breast cancer. As  result she will be having surgery on Oct 17. Ours is a family that has not had a lot of cancer in it. But Kim did remind me that our aunt Pauline Shepard Russell did struggle (successfully) with ovarian cancer back in the 1980s. Our prayers and best wishes go out to Kim and her family at this time, especially as she prepares for surgery later this month. 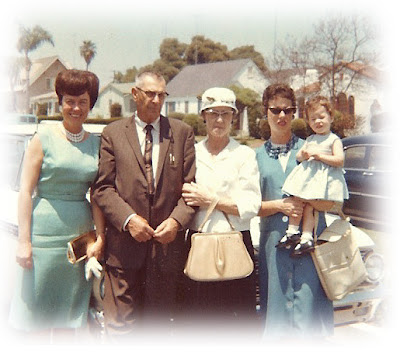 A Corrected Birth Certi- ficate. That was the serious and most important part of the email I received from Kim. She also updated me on her mother Thelma's crazy birth certificate. In a blog post back on Sept 3, I detailed the snafu regarding some very incorrect information recorded by her (not very sober?) birthing doctor in 1936 in the small Southeast Colorado town where she was born.

The second picture from June, 1963 in San Diego shows Thelma Shepard Boyd on the right holding her daughter Kim, next to Thelma's parents Will and Bura Davis Shepard. On the far left is Will and Bura's other daughter Pauline Shepard Russell.

Kim reported in her email to me that the state of Colorado has now issued her mom a corrected birth certificate, after much effort and great frustration. Among the corrections that were made is the important detail that she is female. I have known Thelma as my "aunt" for 64 years, but only now is her gender officially correct, as far as Colorado is concerned. We can only imagine the hoops Thelma had to jump through to prove her gender to her home state. (On second thought, no, let's not.) Nevertheless, congratulations to Thelma!

The whole crazy episode illustrates how genealogy is not an exact science. Sometimes it is far less than that. To put on it a positive spin, it just goes to show you that occasionally life's great annoyances DO get resolved. Even though it took 76 years in this case, we can find some small measure of comfort knowing that the wheels of justice do grind, albeit ever so slowly.
- - -
Steve
Posted by Steve Shepard at 9:59 AM