He who has no fools, knaves,
or beggars in his family
was begot by a flash of lightning.
~Old English proverb

Greetings to all of you from San Diego where Cindy and I have recently returned after a few weeks away. One of the places we visited was Egypt. The first picture shows Cindy and I in front of the famous Sphinx and the Pyramid of Giza, near Cairo, Egypt. Select this link to see other pictures of our trip. 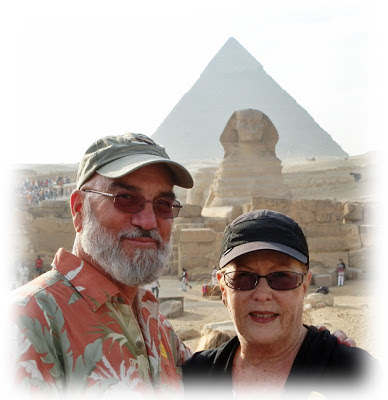 John Pouty Williams. This Friday is the 206th anniversary of the birthday of John Pouty Williams (1806- 1898), a most interesting person in our family tree. He is the  great grandfather of my grand mother Bura Davis Shepard (1896-1986). The lives of John Williams and my grandmother Bura overlapped by a mere 2 years, just long enough for him to bounce her on his knee near the end of his life, a life which spanned almost the entire 19th century.

He was a transition person in our family tree. Born in Spencer County, Kentucky in 1806, his father died in 1813. His widowed mother soon thereafter took John and her other children and moved westward and settled near the town of Spencer in Owen County, Indiana. Here is a blog entry where you can read more about John Pouty Williams and his family. The second picture shows John Pouty's grave in Pleasant Grove Cemetery near Spencer, Indiana. 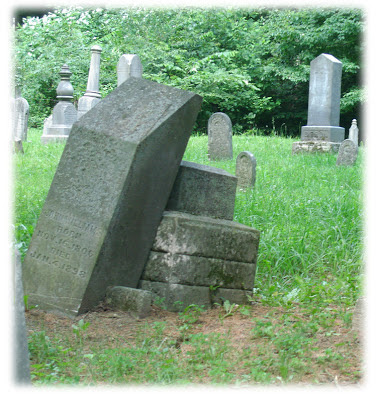 I have encountered quite a number of people who are descendants of his during my online family research. One such person who I have recently begun corresponding with is Cherie Harris of North Carolina, a GGgrandchild of Matilda Jane Williams, the sister of John Pouty. She has also done research into our Williams kinfolk and has traced our ancestry through John Pouty's maternal grandmother Elizabeth van Hook Warford.

Genealogical records in New York document Arent's penchant for having wives who died. His first wife Sara died in The Netherlands in 1652. His second wife Geertje who had migrated with him to New Amsterdam, died in an Indian raid (or so it was rumored). He married a third time around 1660, but this wife also died (her name and fate remain unknown).

Call Upon God to Give a Sign. Records indicate that in 1665 in New York, New York, at the Old Dutch Reformed Church, Arent married Styntie Laurens (my 9x Ggrandmother). In 1682, Styntie (wife #4) after having given Arent 5 children, died very suddenly. As a result the local constable, two magistrates and two doctors went to their home to examine her body. There was nothing obvious to indicate foul play by Arent or anybody else. Arent was, however, ordered to place his hand on her chest and call upon God Almighty to give a sign if he were guilty of his wife's death. When nothing happened, Arent was declared innocent. (Dutch Court Records of Kingston cited in New York Genealogical and Biographical Record, 70 (1939): 365).

It is hard to know what to make of Grandpa Arent and his many wives. After 315 years it is impossible to know anything more than what the record states. Nonetheless, thanks to cousin Cherie Harris for this information about our common ancestor Arent Isaacszen van Hoeck, a colorful character to be sure, and one more immigrant in our family tree.

The following is the lineage of my youngest grandchild William Quincy Shepard through John Pouty Williams, to Dutch immigrant Arent and his wife Styntie Laurens van Hoeck:
- - -
Steve
Posted by Steve Shepard at 10:55 AM