The Pilgrims made seven times
more graves than huts.
No Americans have been more impoverished
than these who, nevertheless,
set aside a day of thanksgiving.
~H.U. Westermayer

Greetings to all of you on this day before Thanksgiving.

My Cousin Kim Clark. I am thankful for many things today. For one, I am thankful that my cousin Kim Clark is doing better after her cancer surgery last month. She lives in Blue Springs, Missouri with her husband Jeff and family. The first picture shows Kim and Jeff in a picture that was taken earlier this year. 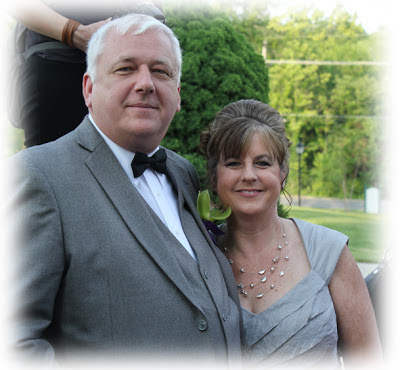 Kim wrote to me recently: I am healing well. Still sleep a lot but down to ibuprofen for pain med.  I'm still restricted to no lifting or house work :( lol.  Such a relief to be cancer free. That was scary there for a while.

Best wishes to Kim for good health and a continued speedy recovery.

The Nitpickers Among Us. I am also grateful for people who read this blog, in particular those who read it with a keen eye.

My son Nathan pointed out to me an error in my last post. I got the date wrong on one of the wives of our ancestor Arent Isaacsen van Hoeck (1623-1697) who I wrote about in my last blog entry. Arent was a 17th century Dutch immigrant to New York who had, over the course of his lifetime, 6 different wives. He married his third wife in New York in 1660. I wrote that he married her in 1860, which was an obwious misteak. The marvel is that Nate would even find it! (And my aunt Thelma thought she was the only nitpicker among us!)

Those Who Have Given So Much. I am also thankful for ancestors I have never met, like my 9x Ggrandparents Arent Isaaczsen van Hoeck and his wife Styntie Laurens. Despite great hardship, they and others like them, boldly immigrated to this country from places like The Netherlands and began families that we are now part of, all these generations later. 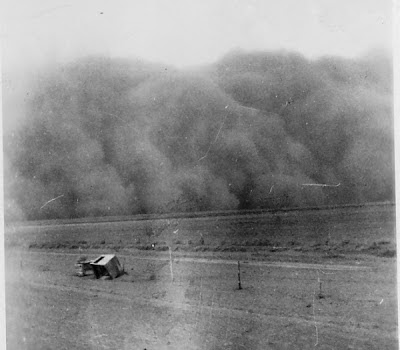 The quote at the top regarding pilgrims who built 7 times more graves than huts, puts the efforts of our earliest ancestors in perspective. Arent and Styntie weren't pilgrims, but they lived at about the same time. Their willingness to help settle this new world required more from them than they ever could have imagined. Thank God for them!

I am also grateful for more recent family members who lived through the dust bowl days of the 1930s in Oklahoma, Texas, Kansas and Colorado. I mention this because this past week the new Ken Burns' TV documentary on the dust bowl appeared on PBS stations around the country. Did you see it? If not, look for it to be shown again some time. The dust bowl was devastating for many of our kinfolk and was one of the reasons some of our family, including my grandparents, moved to the West Coast in the 1930s and 40s.

The second picture, which was handed down to me from my father, shows an approaching dust storm. On the back of the picture is written, "April, 1935, Two Buttes, Colorado." Select this link to read a previous blog entry about the dust bowl and the personal memories of some family members.
- - -
Steve
Posted by Steve Shepard at 4:12 PM