We are the children of many sires,
and every drop of blood in us in its turn
betrays its ancestor.
~Ralph Waldo Emerson

Greetings to all of you on Election Day 2012! This comes to you again from the Cruise ship The Crown Princess as Cindy and I and our traveling companions continue to sail around the Eastern Mediterranean. We are at sea all day today before arriving in Venice, Italy tomorrow where our wonderful adventure will come to an end in a few days.

Happy Birthday Havilah. Today, Nov 6, is the 30th birthday of Havilah Colgain Wardle. Havilah is the daughter of Joan Shepard of Dixon, California and Art Colgain of Kaysville, Utah. She is the first grandchild of Elmer and Beryl Shepard, and the 9th of the 21 Ggrandchildren of Will and Bura Davis Shepard.

Havilah and husband Kevin moved this past summer from West Valley City, Utah to Oahu, Hawaii, where they are enjoying life very much (who wouldn't!). 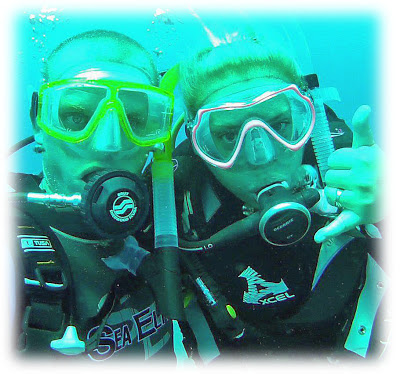 Havilah: "I look forward to turning 30! I've been enjoying every moment of this year, and am so excited to celebrate my birthday! I've received so many gifts this year, like living in Hawaii. It's been an amazing and breathtaking adventure. Thanks to Kevin, I became a PADI open water certified scuba diver in August. Diving is one of the most incredible experiences, especially getting to dive with Kevin. We've seen 3 sharks, octopi, eels, nudibranchs, coral of every kind, sea turtles, live conch, star fish... and I've made friends with a very special fish I call Chunk, as he is missing a chunk from his dorsal fin. He swims with me every time I'm in his cove. Here's to life, and celebrating each step of the way!"

The first picture, taken just a couple of weeks ago, shows Kevin and Havilah in full Scuba Diving regalia in the waters near Honolulu. Havilah's comments about this particular diving trip:

"From the great blue expanse a green sea turtle appears. Hauling turtle ass. Is it heading for the reef? I think it's heading for... oh...my...goodness...it's heading straight at...Dad! This is going to be AWESOME. Turtle body check in... three... two... one... BAM! Get out the way, human! After bitch slapping my dad as it went past, the turtle disappeared under the reef to cuddle with a beautiful little reef shark. Today's lesson: Love is powerful, and so is that green sea turtle."

Our best to both of them for much happiness in Hawaii, and best wishes to Havilah for a great 30th birthday! 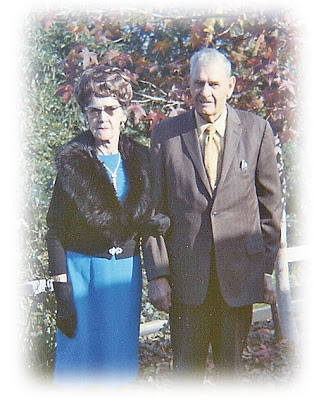 Remembering Bura Davis Shepard. This Thursday, Nov 8, marks the 116th anniversary of the birthday of my grandmother Bura Davis Shepard (1896-1986). The second picture shows Bura and her husband of 61 years, William Shepard. This picture, with fall leaves all around, shows them in their Sunday finest, and was taken in 1971 near San Diego where they lived at the time.

Bura's life spanned the better part of the 20th century. She was born in Spencer, Indiana, but as a teen migrated with her family to Beaver County, Oklahoma where she met and married William Shepard. Their family then lived for 12 years in tiny Two Buttes, Colorado before they moved to San Diego in 1940 where they lived most of the rest of their lives. Bura died in 1986 while living with her son Eugene and family in Anacortes, Washington.

Though she has been gone for 26 years, her memory remains. I think I can speak for all her grandchildren in saying that her influence lives on in the lives of all of us who were touched by her steady faith, her solid perseverance, her even temper, and her no nonsense approach to life. What an extraordinary grandmother -- what an extraordinary person -- she was.

Posted by Steve Shepard at 8:00 AM

I am looking for Kevin or Havilah Wardle. I googled their names and came across this blog. I think I found one of their wedding bands. I couldn't find another way to try and contact either one of them. Please let me know if one of them is missing a wedding band. It was found while I was snorkeling in sharks cove (Hawaii).