Christmas is the season of joy,
of holiday greetings,
of gift-giving,
and of families united.
~Norman Vincent Peale 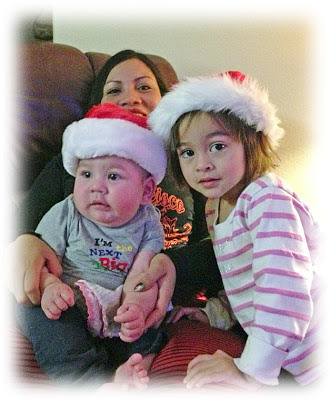 Greetings to all of you on Christmas Eve! May this holiday be a joyful one filled with happiness and wonderful family gatherings.

The first picture shows a couple of the Christmas celebrants at our house this year. In the Santa hats are William Quincy Shepard and his big sister Preslea, in the lap of their mother Chenda.

Tomorrow is the birthday of my Grandfather William Shepard (1888-1976), who was born 124 years ago in Alton, Illinois on Christmas Day, and who died in San Diego in 1976. He and my grandmother Bura Davis Shepard spent 61 years together, during which they raised 4 children, welcomed the arrival of their 12 grandchildren, and were still around to celebrate 6 of their 21 Ggrandchildren. There are 51 branches on our family tree that are the direct result of their life together.

The second picture shows William Shepard's grave. He and his wife Bura are buried side by side in a beautiful corner of Greenwood Cemetery in San Diego, in a section with a dozen or so other Shepard, Gower and Russell family members. 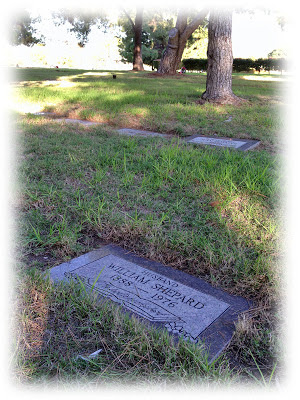 I mentioned the book Shannon in my last post, written by Dexal Shannon. In its index are 25 different William Shannons. "William" is also a common name on the Shepard side of our family, nearly as common as it is on Gower/Shannon side.

William Quincy Shepard, born this past summer, is a descendant of both the Shepards/Davises and the Gowers/Shannons. His name sakes are his GGgrandfather, his GGGgrandfather, and his GGGGgrandfather, all of whom had the name William Shepard, as you can see in the 8 generation lineage below. The fourth name in the list is the William Shepard whose birthday we remember on Christmas day. Grandad would be proud that his name is being carried on, into the 21st century, by the youngest Shepard among us.
The picture below shows 6 consecutive generations that are included in the lineage above. The William Shepard whose birthday we remember tomorrow is in the middle of the top row. 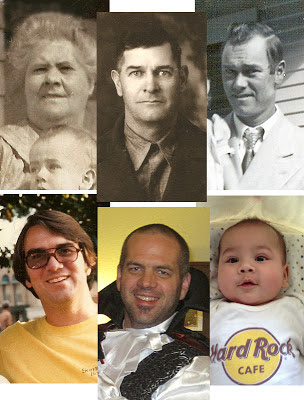 As you can tell, I have taken a liking to this format showing consecutive generations of family members. It gives us a feel for the flow of our family history and enables us to see the similarities (or differences) in appearance over the generations. (Note: the baby in Elvira's lap in this montage is her grandson Elmer Shepard, 1918-2012.)

Blessings to all of you this Christmas!
- - -
Steve Shepard
Posted by Steve Shepard at 3:04 AM

Anonymous said...
This comment has been removed by a blog administrator.
4:02 AM