You can kiss your family good-bye
and put miles between you,
but you carry them
with you in your heart,
because you do not just live in a world
but a world lives in you.
~Frederick Buechner

Greeting to you as 2012 draws to a close and a new year is about to begin.

Pauline Shepard Russell. On this date, December 28, in 1916 -- 94 years ago -- my aunt Pauline Shepard was born. She was the first child of William and Bura Shepard, who had just gotten married the year before in Beaver County, Oklahoma. When Pauline was just 11 years old her family moved to Two Buttes, Colorado, where she finished school and then, just a week after her 18th birthday, married Bill Russell in 1935. Pauline and Bill in 1940 moved to San Diego where they raised their children and lived the rest of their lives. The San Diego area is where she died in 2000.

Pauline and Bill had two children, Rex and Beverly, who are both gone now, but two of Bill and Pauline's grandchildren remain -- Eric Russell of Red Rock, Nevada, and Shannon Wilk of Atchison, Kansas. Shannon has one daughter, Emma, who is the lone Ggrandchild of Bill and Pauline Shepard Russell. 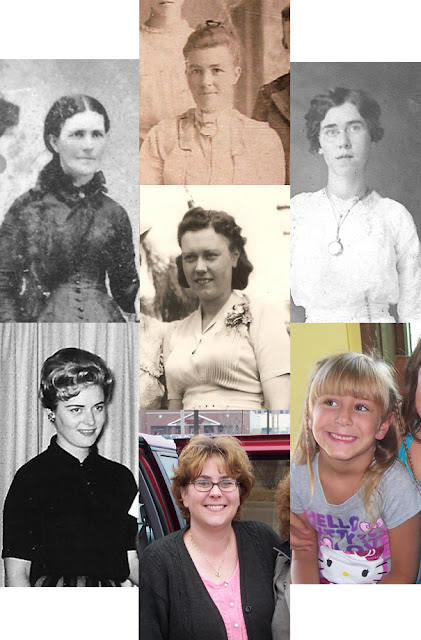 The collage above includes my aunt Pauline Shepard Russell in the middle, in a picture taken in San Diego about 1945. Across the top are her Ggrandmother Maggie Williams Spear (about 1880), her grandmother Callie Spear Davis (in 1896) and her mother Bura Davis Shepard (in 1915). Across the bottom are her daughter Beverly Russell Wilk (in 1959), her granddaughter Shannon Wilk (in 2008), and her Ggranddaughter Emma Wilk (in 2011). This is a unique collection of pictures. Nowhere else in my entire photo collection do I have pictures of 7 consecutive generations of women. The lives of these 7 stretch over a period of 167 years. 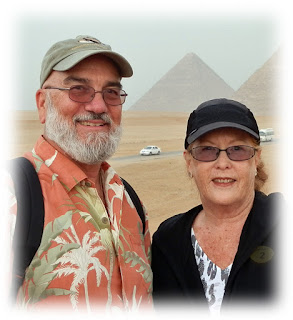 Happy Anniversary! Yesterday was the wedding anniversary of my wife Cindy and me. We were married 44 years ago at the La Mesa Church of Christ near where we live today in San Diego. Thanks to Cindy for putting up with me for all these years. The second picture, which was taken back in October while we were on vacation, shows Cindy and me. Thanks to our friend Linda Tanner for taking this picture.

Happy Blogiversary. It was 5 years ago today that I first began writing about family in this blog. Since that time I have written 302 posts on my Shepard, Davis, Gower and Shannon families with other ancestors included along the way. I have posted over 700 different family pictures and have told endless stories -- all of them true; many of them factually accurate! ;-)

How much longer this kind of thing will go on, I cannot say. What I do know is that our family life goes on, and children continue to be born with no end in sight! And our knowledge of our ancestors continues to grow. It appears there will never be an end to what needs to be said about who we are, who we have been, and what we make of it all.
- - -
Steve
Posted by Steve Shepard at 9:31 PM