Age is a question of mind over matter.
If you don't mind, it doesn't matter.
~Satchel Paige

A 125th Anniversary. Christmas, 2013 is the 125th anniversary of the birth of my grandfather William Shepard. He was born December 25, 1888, longer ago than anyone in our family that I have ever known personally. The only other family members I have known who were born before the turn of the 20th century were my grandmother Bura Davis Shepard (1896), and my maternal grandfather Leroy Gower (1899). 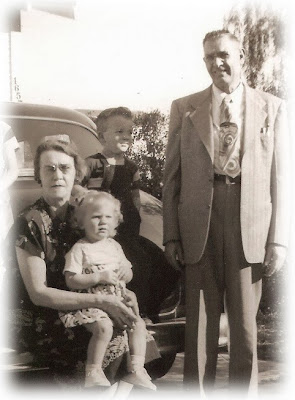 It seems only appropriate then to spend some time this month celebrating granddad William Shepard by reviewing his life with special consideration of what we have learned about him and his ancestry in recent years. I am grateful for the wonderful grandfather that he was, and honor him this month, 125 years after his birth.

He was born and lived his early life in Alton, Illinois, which is across the Mississippi and upriver just a ways from Saint Louis, Missouri. He and his family, including his only sister Sadie and his parents William Elmer and Elvira Owen Shepard, moved from Illinois to Oklahoma about 1905 and settled in Beaver County. There he met and married Bura Davis, who would be his life partner for over 60 years. After relocating for 12 years to Colorado, they and their four children made their way to San Diego, where he lived the last 36 years of his life.

The first picture shows a well dressed William Shepard in a family picture in San Diego about 1952, in front of their home in North Park. His wife Bura is sitting on the bumper of their car, their granddaughter Linda Shepard is in her lap, with me in the middle of this photo. At the time of this picture William was just about the same age that I am now. (I think I recognize that expanding waistline!) 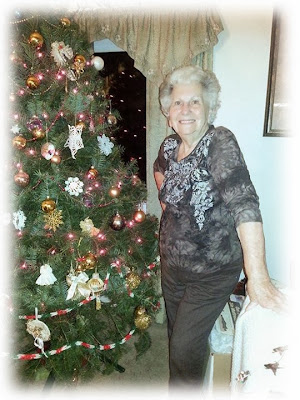 In the years since he died, computers and the internet have made it possible to discover one's family history in ways that were never dreamed possible before. I will share more about that in my next blog post.

That Was Then; This is Now. The second picture I am including shows Christmas 2013 in Anacortes, Washington. In the picture is my mom Maida Shepard. She was was a daughter-in-law of William for over 30 years and it was in her home that he and Bura lived for the last few years of his life.

In this picture she is taking a break from trimming the Christmas tree at her home on Wildwood Lane where she lives with grandson Steven and daughter Barbara. Thanks to Barbara for taking this picture and sharing it on Facebook.
- - -
Steve Shepard
Posted by Steve Shepard at 5:27 PM