We are not the same persons
this year as last;
nor are those we love.
It is a happy chance
if we, changing,
continue to love a changed person.
~W. Somerset Maugham

It is hard for me to believe that today is the 45th wedding anniversary of Cindy and me. It was in 1968 on this December day, which also happened to be on Friday, that Cindy and I were married at the La Mesa Church of Christ here in the San Diego area. It was an evening wedding, officiated by my second cousin Edwin Kilpatrick, who was also the minister of my family's church, the Linda Vista Church of Christ.

Among those in the wedding party all those years ago were Gloria Weston, Pam Henderson, Connie Cleland, my sister Linda, my brother Gary, the Deveny twins, Dan Frost, and Cindy's brother Joe Paul. The wedding was attended by a large number of our family and friends. 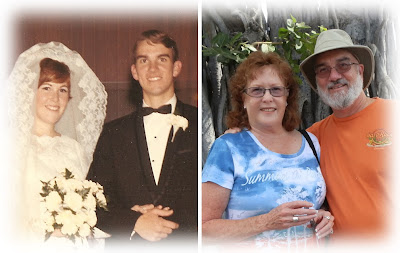 I was home on Christmas break from college at Abilene Christian in order for us to get married. After the wedding we took a few days and went up the California coast for a quiet honeymoon that was a welcome rest after all the hectic preparations for the wedding (most of which I was able to avoid!). Within a few days we returned to Texas for school where we both continued our studies for another year and a half before returning to California. Our first home together was a small apartment across the street from the College. The memories of that time, though they grow faint, still fill us with warmth and joy.

The first picture (above) shows the two of us. The left half of the image was taken 45 years ago on our wedding night; the right half was taken just last month while we were on vacation in Kona, Hawaii. The right half of this picture was taken by my mom Maida Shepard, the same person who had to "sign for me" when we got our marriage license all those years ago. Cindy and I were both 20 at the time but an archaic California law stated that men were underage at 20 while women were not. 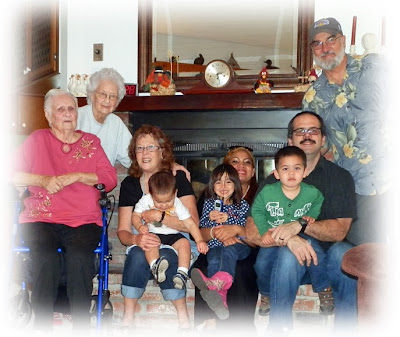 That Was Then; This Is Now. Tonight we plan to leave all our house guests to fend for themselves and have dinner somewhere here in San Diego at a nice restaurant as we celebrate our years together.

The second picture was taken this past Thanksgiving and shows Cindy and me with our son Nathan, his wife Chenda and their children William, Preslea and Logan. On the left are Cindy's aunt Juanita Eeds and Cindy's mom Paula Harris.
- - -
Steve
Posted by Steve Shepard at 10:25 AM