As I mentioned in my last post, this Christmas celebrates the 125th anniversary of the birth of my grandfather William Shepard (1888-1976). The first picture (below) shows William with his wife Bura Davis Shepard on Christmas Eve, 1973 -- 40 years ago.

Our Growing Body of Knowledge. The discoveries that have been made about his ancestry since his death have been amazing. We knew that he was originally from Alton, Illinois. We have also known that his father William Elmer Shepard was originally from Wabash, Indiana, but settled in Madison County, Illinois where he married Elvira Owens before they moved to Oklahoma. We have also known that his grandfather William Shepard was from Wabash, Indiana, and died in the Civil War as a young man. 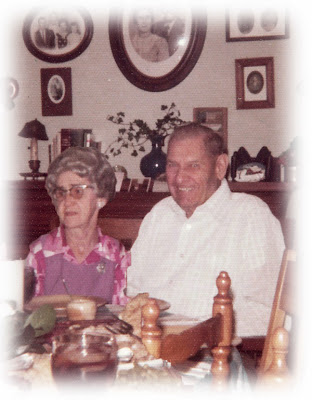 But research done in recent years has filled in many of the gaps in our knowledge of him and his ancestry. We have learned that his great grandparents on the Shepard side were James and Hannah Shepard (Shepherd?), of Eastern Ohio, who migrated to Indiana in the early 19th century. James' grave can be visited in Paint Creek Cemetery outside tiny Camden, Indiana.

William's grandfather, also named William Shepard, was seriously injured in what was probably the first battle of his Civil War regiment at Bowling Green, Kentucky, in February, 1862. The soldier William was taken to a military hospital in Evansville, Indiana where he languished for 5 long months before he died in July, 1862. His grave in the Civil War section of Oak Hill Cemetery in Evansville is a solemn, historic location.

Furthermore we have learned the identity of William's grandmother, Mary Sprague Shepard, the Civil War widow who was left with an infant son when her husband/soldier died. Her son was born and her husband was wounded in the same month, February, 1862. The widow Mary went on to marry an older man, William Ragsdale, who she hoped would care for her and her fatherless son. She may have been cared for well, but her son William Elmer Shepard found life in the home of his step father unbearable and left home as a teen, never to see his family again. Mary Sprague Shepard Ragsdale died in 1919 and is buried today in Crown Hill Cemetery, Indianapolis, Indiana.

The runaway teen William Elmer Shepard, in about 1880, ended up in Madison County, Illinois where he married Elvira Owen and made a good life for himself. He, Elvira and their two children moved to Oklahoma in the early 20th century. William Elmer and and Elvira are buried in Sophia Cemetery in Beaver County, Oklahoma.

Most of the foregoing details were unknown to granddad before he died in San Diego in 1976. His story, the elements of it he knew, and the elements he never knew, are all part of our family's history, a history that is important because it is OUR history. These are our people. This is literally our connection to the past, our American tale, a story that deserves to be preserved and passed on. 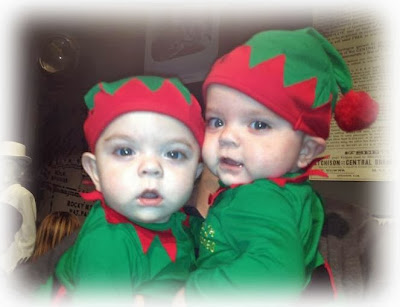 It is unfortunate that granddad never knew much of his own family's history, but it is fortunate that we have been able to fill in so many of the details in recent years. There is much more to learn. As the years go by we will learn even more about all parts of our family. That knowledge that will become an integral part of our self understanding, that we can pass on to future generations. Ours is a wonderful American story, with both heartbreak and happiness, inspiration and regret, successes and failures. It's a story that we celebrate on this 125th anniversary of granddad William Shepard's birth.

That Was Then; This Is Now. The second picture I am including shows twin Christmas Elves, Dominic and Isaac Ortiz, who are Great Great Grandchildren of William and Bura Davis Shepard. They are sons of Jeremy and Desiree Ortiz of Blue Springs, Missouri. Jeremy's mother is Kim Boyd Clark, and his grandmother is Thelma Shepard Boyd.
- - -
Steve Shepard
Posted by Steve Shepard at 10:19 AM