My grandmother started walking
five miles a day when she was sixty.
She's ninety-seven now,
and we don't know
where the heck she is.
~Ellen DeGeneres

Family and Media. Occasionally I come across a depiction of family in a novel or movie or in some other media that I feel compelled to mention in The Shepard's Crook. Such was the case when Cindy and I recently viewed the movie "12 Years a Slave".

It is a hard hitting story of a free man taken into slavery in pre-Civil War America. It is based on actual events documented in the 1853 book of the same name, by Solomon Northup. This award winning film includes one of the most powerful and emotional scenes of a family reunion I have ever witnessed on the big screen. It is the tale of a family torn apart by deceitful men, the resulting injustice and violence, and then the eventual return of family members to relationship with one another.

The acting is outstanding, the story is believable and well told, the message is strong and unequivocal, and the overall movie experience is excellent. For those willing to view horrific yet true to life scenes of early 19th century slavery, it is a remarkable movie that lifts up the power of familial love. In view of the harsh challenges that families encounter, it is a clear testimony to the enduring strength of the ties that bind us. 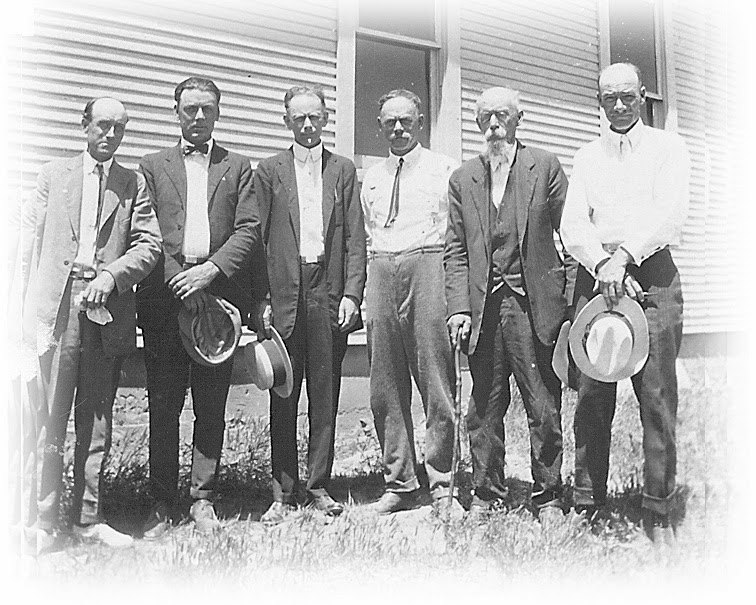 Many of the folks in our family tree were part of a major move that their family made from one state to another, e. g. from Oklahoma to California, or from Indiana to Oklahoma. But C.E. Davis was one of the few people who made a major move early in his life, as a child, from Ohio to Indiana; and then later in life when, about 60, he made another major move from Indiana to Oklahoma where he lived the last 16 years of his life.

The first picture I am including (above) is one you have seen before in this blog. Taken in the early 1920s, in Beaver County, Oklahoma, it shows Charles Edward Davis (second from right, with a cane) as he was nearing the end of his life. Standing with him are 5 of the 6 sons born to him and his wife Malinda Wright Davis: Zaley, Benjamin, Morton, James Brooks and, on the far right, John. 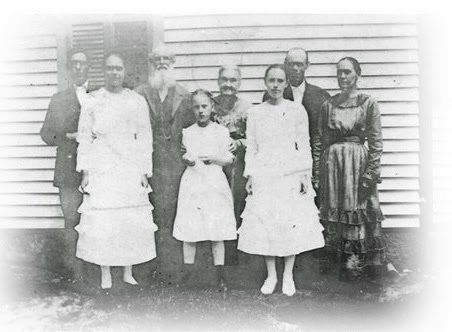 The only son of Charles and Malinda Davis not included in the family picture above, is Thomas Davis, who lived his whole life in Spencer, Indiana, and did not migrate with his family to Oklahoma in the early 20th century.

The second picture, also taken in the early 1920s, shows Thomas Davis (second from right), and the Hinton family into which he married. (Compare Tom Davis in this second picture, with his brother Zaley Davis, on the far left in the first picture, and you can see a remarkable resemblance.)

In this second picture with Thomas Davis is his wife Alice Hinton Davis on the far right. Also in this picture, taken in Spencer, Indiana, from left to right, is Loomis Hinton, Lucy Davis, bearded grandpa William Hinton, Stella Davis, Delia Hinton and Mamie Hinton.
- - -
Steve Shepard
Posted by Steve Shepard at 12:06 PM