When we try to pick out anything by itself,
we find it hitched to everything else in the Universe.
~John Muir

Remembering Manuel Aquiningoc (1961-1992). This Saturday, July 19, would have been the 43rd birthday of Manuel Aquiningoc, late husband of my niece Kerri Shepard Aquiningoc of Weatherford, Texas. His untimely and tragic death in San Diego occurred 22 summers ago in 1992.  Manuel is still warmly remembered today by those who knew him, especially his wife Kerri and his daughters Lyndsey and Mandi. 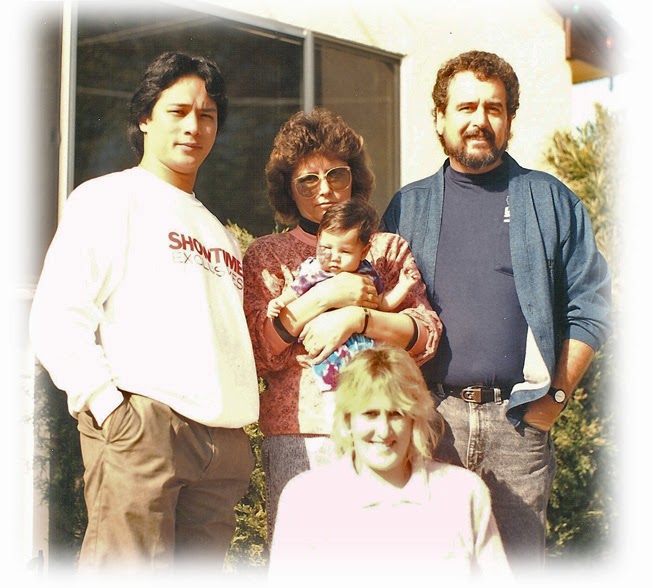 The first picture shows Manuel (left) with his wife Kerri (in front) and Kerri's dad Gary Shepard (right) and Gary's wife Cindy (in the middle) holding Lyndsey. This picture was taken in 1991 in front of the Harris home on Burgundy Street in San Diego.

More Cars and the Stories They Tell. Last summer I spent a few weeks in a different kind of family story telling which I titled "Cars and the Stories They Tell." I considered various automobiles that were significant in the life of family members in the first half of the 20th century. I would like to pick up that same theme and look at the second half of the 20th century.

A 1952 Ford Country Sedan was our family's station wagon for several years when we lived in the Point Loma community of San Diego in the mid-1950s. At that particular time the Country Sedan was a common vehicle for modest working class families like ours. It was something of a step down from the big flashy Buicks of my uncle Hank Gower, or even the stylish Mercury Medalist of my Shepard Grandparents. But in its own way our Ford was something of a classic. Here's a website that tells you more about this special car.

The second picture gives you a pretty good view of our 1952 Ford Country Sedan in the driveway of our home on Rosecrans Street in Point Loma. Taken in June of 1958 this picture also shows my siblings Linda and Darrell Shepard, who at the time were the two youngest children of Maida and Eugene Shepard. Barbara would be born the following year, and Russell three years after that. 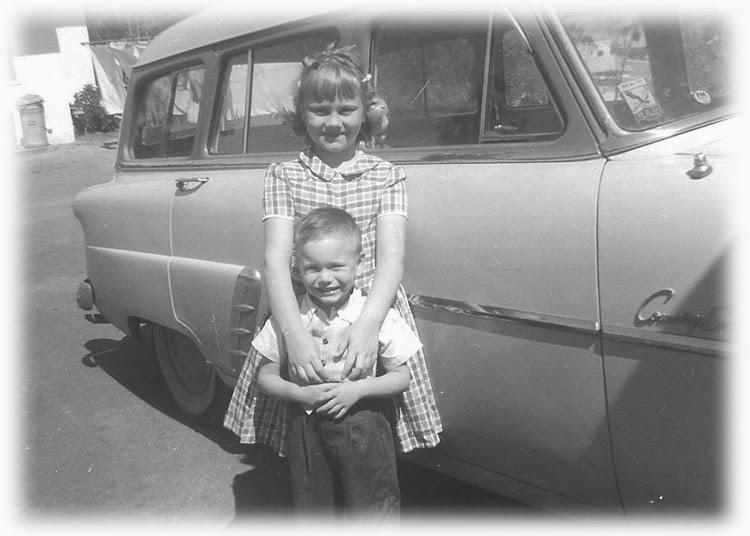 Our station wagon was a light brown vehicle with white sidewall tires, a V8 engine, three rows of seats, but not a single seat belt. It was the only car we had and it took us everywhere, including to Church each Sunday morning on El Cajon Blvd. Sadly this Ford was the instrument of death for the family puppy when mom accidentally ran over it as she backed out of the garage one hurried morning. Despite that, it was a memorable vehicle for us for several years and served us well. As I recall, it was even the primary vehicle used in moving our family to our first purchased home on Armstrong Street in 1959. I remember going on several family vacations in it, usually with dad's homemade, one wheel, wooden trailer being pulled behind, full of camping gear and other traveling needs for a family of 6.

Especially memorable was one particular vacation in the late 1950s when Dad, Grandad, my older brother Gary and I used it to go camping in Sequoia National Park, a few hundred miles north of San Diego in Central California. We encountered a thieving bear on that trip which formed the grist for tales that Dad and Grandad told and retold (and probably embellished!) for many years. The hungry bear came into our camp in the middle of the night, rummaging through our food bin and awakening Dad. He frantically turned on the Ford's lights and honked its horn to scare the furry thief away. Through it all Grandad slept peacefully and, much to his chagrin, had to be told of the night's events the following morning.

On the way out of the mountains, as our station wagon carried us down Highway 198 into the San Joaquin Valley we descended a long steep grade and the Ford's brakes began to fail. I don't ever remember Dad and Grandad being as worried as they were that day, with the smell of burning brakes in the air. Carefully using the emergency brake as well as the foot brake, Dad negotiated the grade and we made it to the flatlands safely, breathing a sigh of relief. At least Dad and Grandad did. Gary and I weren't worried a bit and thought it was a great adventure. The four of us returned to San Diego, none the worse for wear, grateful for Dad's prowess, and appreciative of that '52 Ford that carried us safely home.
- - -
Steve Shepard
Posted by Steve Shepard at 1:39 PM