Somewhere in that pad of stuffing
is a toy who taught me that
life's only worth living
if you're being loved by a kid.
~Buzz Lightyear (Toy Story 2)

Happy Birthday, Amanda. This coming Monday, Aug 25, is the birthday of Amanda Ortiz Davis of Blue Springs, Missouri. Amanda is the daughter of Kim Boyd Clark and the granddaughter of Thelma Shepard Boyd, also of Blue Springs. Amanda was born in Gallup, New Mexico and lived much of her life in San Diego before moving to Missouri just a couple of years ago. The big news in Amanda's life this year is her marriage in Las Vegas to Justin Davis in February. 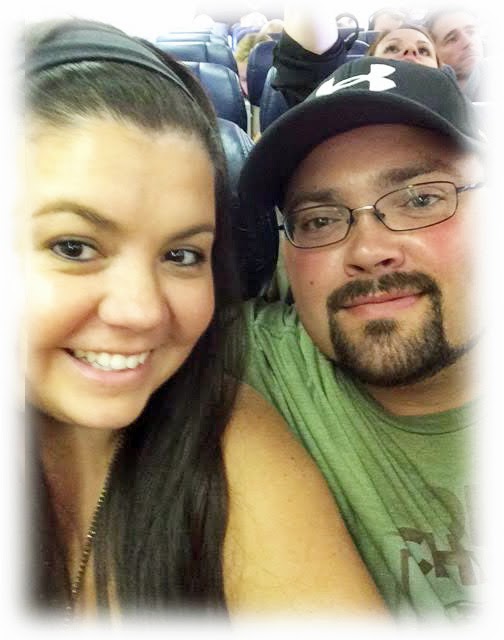 Amanda: "Life is good :)  Turning 30 was amazing! The greatest year ever. And I know that now I am turning 31 it will be even better :) Married life is great and I am loving every minute of it. Not only am I turning 31 on Monday but Justin and I are closing on our first house that day as well! Talk about a birthday present :) We will be celebrating my birthday this weekend with the family. The picture is one we took while on the plane to Florida for our honeymoon :) Thanks for the birthday wishes!"

Another Car and the Stories It Tells. I have mentioned before in this blog that my Dad, Eugene Shepard, loved to buy used cars for our family and then tinker with them as he put them to good use. One such car was a 1962 Mercury Meteor, an important part of our family's life 50 years ago, in the mid 1960s when we lived on Armstrong Street in San Diego.

Ford Motor Company's Mercury Meteor was only made from 1961 to 1963, with a name intended to appeal to the excitement of the "Space Race" which was in full swing in America at the time. The "Space Race" skyrocketed in the next few years (we walked on the moon in the summer of 1969). While the sales of the Meteor model fizzled out and it was discontinued at the end of 1963. That may have been why it made a pretty good deal for Dad when he bought a used one about 1964. 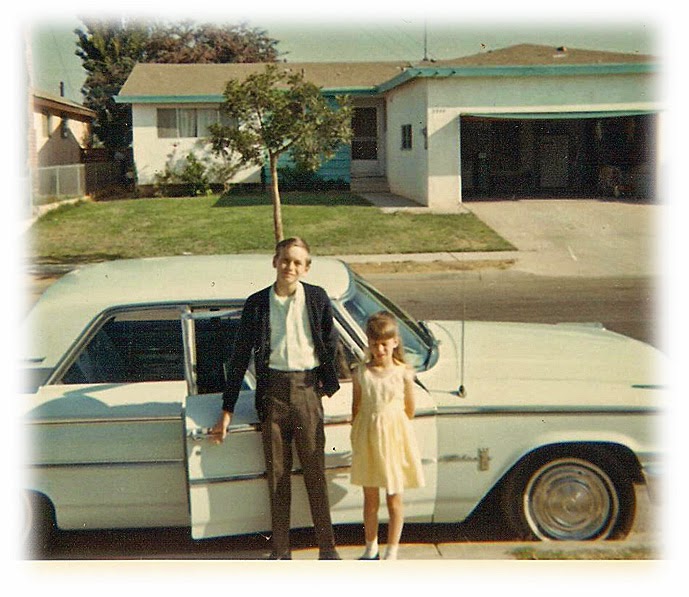 Dad's Mercury was used by the family in many ways, including getting us to church three times a week at the Linda Vista Church of Christ. The second picture shows my brother Darrell and sister Barbara in their Sunday best, curbside in front of our home on Armstrong Street. They are standing beside the car, holding the door invitingly open, on a "Lord's Day morning" in the fall of 1966.

This car was especially memorable for me for a couple of reasons. In March of 1964 I turned 15 1/2, the magical age when it a teen could obtain a driving permit in California. So it was possibly in Dad's '62 Merc that I learned how to drive. I am sure, however, that it was the car I used many times to take Cindy on dates in 1965 and 1966, to the beach or to a Drive-In theater, to church youth activities or to the "A and W" near our home in the new San Diego Community of Kearny Mesa. 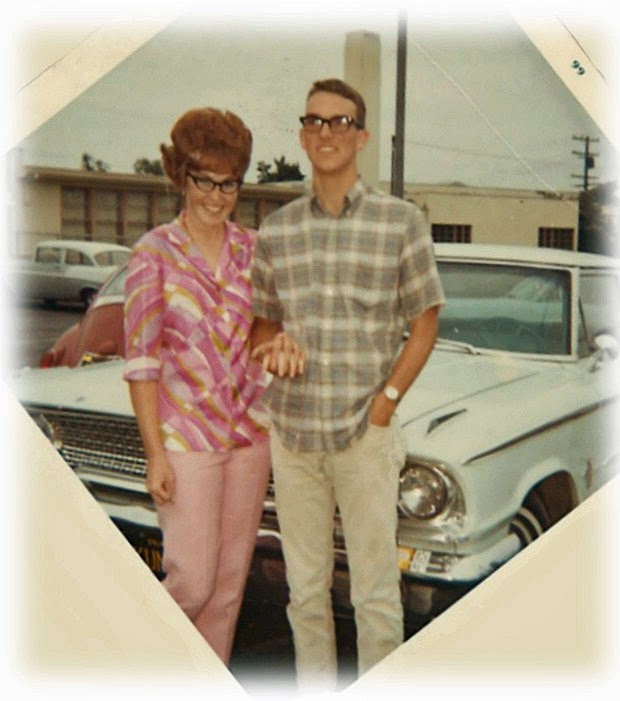 Dates to Drive-In theaters in that car stand out in my memory. The best value was a double feature, or if we were really lucky, a triple feature (yes they had such things), which would occupy us until the wee hours of the morning. But I had to be careful to get Cindy back to the Harris home and then the car back to our Shepard home by 5:00 a.m. That's when Dad got up to go to work. There would be hell to pay if the car was not safely in the garage and available to him when he was ready to leave. My objective on such occasions was to get home and crawl into bed just before Dad's alarm sounded. More than once I heard his alarm before I drifted off.

This Mercury was also the car I used in the spring of 1966 when I took my girlfriend Cindy to the annual Junior-Senior Banquet, a formal city-wide church youth event. More than just a banquet, it included other chaperoned activities that took us through the entire night. The third picture, taken by Cindy's Dad Joe Harris, shows Cindy and me at the end of that annual event with my Dad's '62 Merc behind us. Note the yellow bumper tag on the car, Dad's work sticker giving him access to the Naval Supply Depot in Point Loma where he worked. It was my constant reminder whose car this really was. This is the oldest picture we have of Cindy and me together, taken just weeks before we graduated High School and a couple of years before we married.

We went though a number of cars while growing up in Kearny Mesa, almost always having two at a time. But this 1962 Mercury Meteor, as dependable as it was memorable, is the one I remember better than any of the others.
- - -
Steve Shepard
Posted by Steve Shepard at 3:19 PM